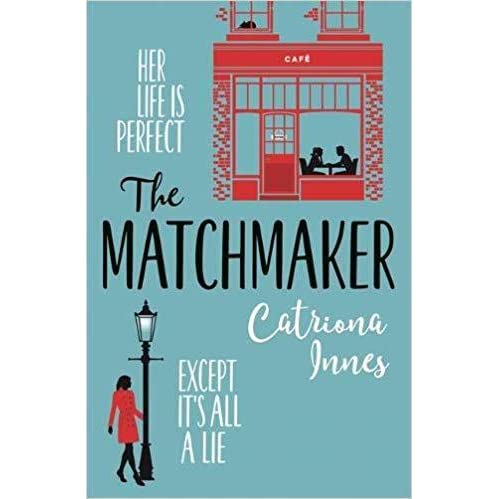 The Matchmaker by Catriona Innes

CATRIONA INNES: I DON’T BELIEVE IN THE IDEA OF ‘INSTAGRAM POETS’

We chat to The Matchmaker author about her unconventional family and the poem she has written for The Family issue of Popshot Quarterly.

Author, poet and journalist Catriona Innes is our guest author for The Family Issue of Popshot, having contributed the beautiful poem called ‘A Woman’s Choice’.

Her debut novel, The Matchmaker, was published in 2019, and she’s features director at Cosmopolitan magazine. Here she tells us about her writing life:

Q. You’re a journalist, editor, novelist and poet – how do you keep track of your writing life, and know what form an idea might take?

A. Even though the process and writing for each is totally different, there is crossover and they do all feed into each other. I didn’t expect that at all! The novel writing and poems largely offer me creative freedom that my journalism can’t, as essentially – of course – with my articles the story has to follow the facts. I also, mostly, keep my own opinion largely out of the articles, preferring to let the reader decide, rather than me trying to tell them what to think/sway them with my thoughts.

Whenever I write an article and I think “Oh wow, imagine if it had gone this way?” I can then keep that thought and it might turn up later in a novel. You also meet a lot of interesting characters through journalism and I can blend them and take scenarios from that and work it into a novel scene.

Poems are a means for me to express how I feel about something, whether that’s decoding my own past (which I tend not to write about too much in longform as it involves exposing the privacy of my family/friends who aren’t as comfortable with airing their dirty laundry as I am!) or voicing my thoughts on something topical that I might have come across during my daily editing.

When it comes to knowing what form an idea might take it does tend to come naturally for the poems, as often they almost float into my head and I have to get them down, whereas a feature idea takes time to craft with a lot of research to check what I’m thinking is actually worth reporting on. Novel ideas just have to fascinate me enough to spend years on them, so are much rarer.

Q. Your debut novel, The Matchmaker, came out in 2019. Can you tell us a bit about the book and your journey to publication?

A. I had finished writing my first (unpublished) novel and was looking for an agent for it the classic way, so… writing emails to agents and being (very politely) rejected. Through my work, I was also lucky enough to go to a lot of book launches and parties so was chatting to publishers there and was approached to write something loosely based on the TV show First Dates. I’d long been fascinated by experts and their personal lives, for example – are sex experts always having amazing sex? Do life coaches have it all sorted? So through that I pitched an idea about a professional matchmaker, who uses her own successful love life as advertisement, but is hiding a secret.

The team at Trapeze liked the idea and after months of playing with the plot and seeing where it could go I began writing. I used Save The Cat loosely to help with plotting, read a lot of thrillers (as they’re so good at slowly drip-feeding the reader the secret) and, as I was working full-time, abandoned my social life and got up every day at 6am to write for an hour, editing at weekends. In total, I think it was almost two years in the making.

I’ve struggled a bit since the book came out with having the confidence to speak about it, which I think is a lot to do with the general snobbery/misogyny that surrounds women’s fiction. But I’m really proud that, on the surface, it’s a fast-paced, light-hearted book to read in the bath or on the beach but it addresses a lot of deeper issues, like grief, friendship and the expectations and pressures placed on women to view love and relationships in a certain way. It has also been translated into Russian and German which I think is exciting!

Q. You share poems on Instagram and have said that poetry is a new form for you. Can you please tell us a bit about this, and explain what your process is when it comes to writing poems?

A. When I first started sharing my writing on Instagram I didn’t even realise what I was writing could be classified as poetry! I didn’t know much about poetry at all apart from being a huge fan of Yrsa Daley-Ward. But it was lockdown, and I was also going through some health issues, as they’d found a large cyst on my ovaries which needed operating on, so I wrote a few lines trying to explain how I felt being so dismissed by doctors and the general process. I was also supposed to be writing my second book but was struggling to concentrate for long periods of time so writing short pieces helped me creatively.

At first, I’d find these little pieces would pop into my head – in yoga class, just before bed, on nights out – and I’d want to get them down as quickly as possible and just put them out there. I didn’t want to overthink or over-edit them. Now I try to do a bit of both, when an idea comes I’ll write it down straight away and then over the next couple of hours try to edit myself more, tinkering and playing with different lines. I tend to write in pen, then in my notes app and then transfer over to pages before posting. But sometimes, admittedly, I will write something a bit drunk and just post it before I get scared! I’ve also been reading and discovering other poets, buying collections and attending workshops to learn more about it.

At the moment I am writing poems largely based on the things I’m addressing in therapy which is interesting… but maybe posting them on Instagram isn’t the best outlet, as it’s a platform based on getting you hooked on external validation. But, saying that, I love how Instagram has connected me with amazing people who relate to my writing, but also introduced me to lots of other amazing poets. I know some people are against sharing poems on Instagram and I do have a love/hate relationship with it, as I worry it can hinder me in some ways (e.g: I try not to write for what I think will get me the most ‘likes’ but it can be hard to break out of that mindset) but at the same time I think the snobbery surrounding it is totally unjustified. I don’t believe in the idea of ‘Instagram poets’ – it’s just writing shared on a platform.

Q. Thank you for contributing A Woman’s Choice to the Family Issue of Popshot. Can you explain a bit about your inspiration for the piece?

A. I’ve just turned 36 and my entire life I’ve been fed the idea that once you’re past 35 your fertility drops off a cliff. I’m still very much unsure whether I want children or not and, from this, have noticed that I’ve found myself feeling really unsteady about my ‘value’ as a woman if I don’t. For women, it can often feel like we’re only worth something if we’re attractive (which we’re often told is young and thin) or we’re reproducing. Even in our careers, particularly the industry I work in, youth is fetishised. Past a certain age it can feel like the only acceptable route to go down is childless career women (“her job is her baby”) or motherhood. And if you’re neither, well, you better be ‘hot.’

I was raised by a quite unconventional family unit (my mum was the feminist writer Sue Innes and my dad is the transgender playwright Jo Clifford) and had the importance of rebelling against what society expects of you drummed into me from a young age. Yet I still absolutely find myself playing into these expectations of what a woman should and shouldn’t be. The poem is exploring the impact external messaging can have on the way we see ourselves. But mostly it’s a bit of a rant I wrote at 4am when I couldn’t sleep as I was fretting so much about how others perceive me.

Find her poem in The Family Issue of Popshot Quarterly, on sale now!