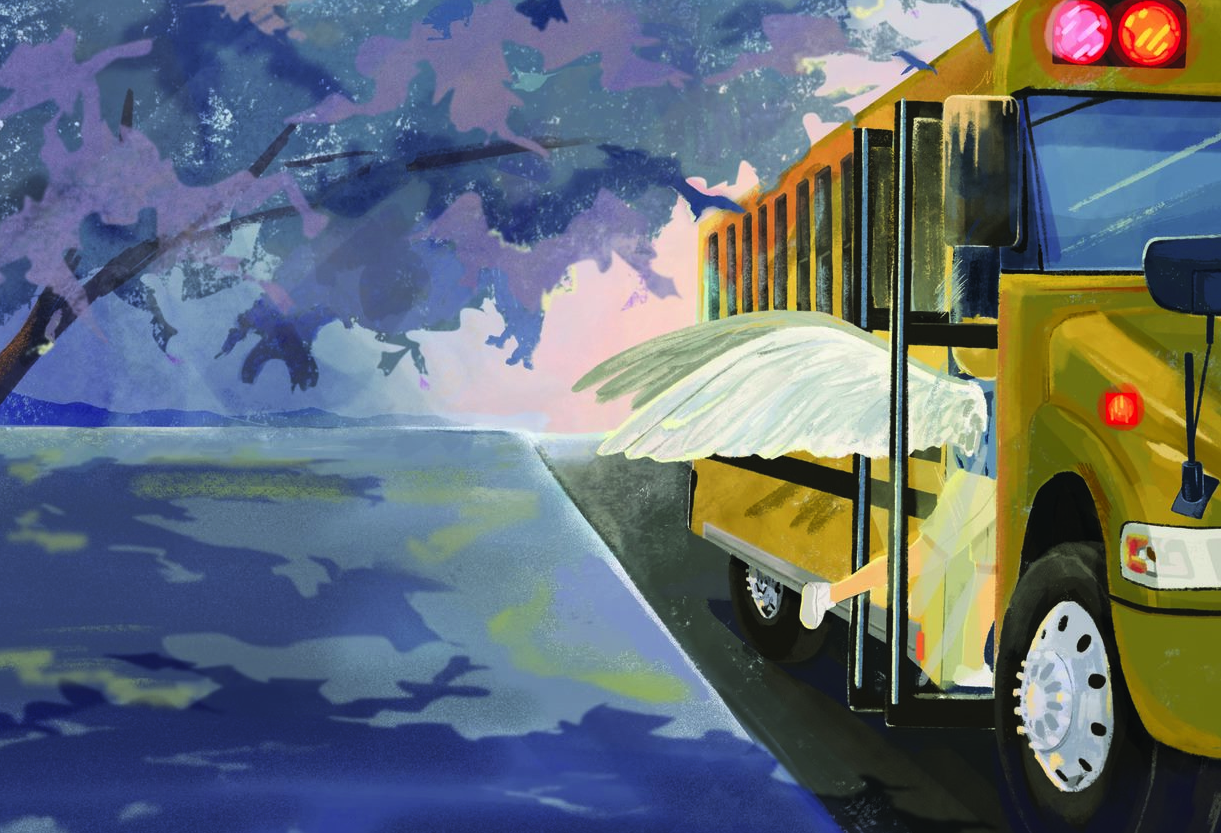 This short story by Natalie Wolf is about a childish wish to grow wings that comes true. Illustration by Tiffany Dang

It took two months of wishing for the wings to grow. After standing in front of his mirror each night, scrunching his shoulder blades together, and hoping with all his might, the boy woke one morning to feel the new appendages smushed unpleasantly beneath his blankets.

When he sat up and threw back the covers, they spread wide without warning, one knocking the lamp from his bedside table. He felt them delicately with his fingertips to make sure that they were real and then ran downstairs to show his mother.

She was surprised at first but soon grew accustomed to the idea. People were far more accepting of difference these days, so why should her son’s wings be any concern? Although there were certainly some logistics to consider.

The wings were small where they connected to the boy’s back but widened out, so any slits she cut in the backs of his shirts would have to be quite long to accommodate. She decided that a few buttons at the tops and bottoms of the slits would do the trick. Or maybe snaps instead of buttons. He was still young.

The wings were a soft, buttery cream colour, with a few cocoa-coloured feathers near the tips and the shoulders. The boy had been hoping for black, to better blend in with the night, but people who grew wings in their sleep couldn’t be choosers. He wanted to test them out immediately, but his mother insisted he wait until after school. What with brushing his teeth, eating breakfast, and figuring out a short-term clothing solution, there surely wouldn’t be any time to fly before the school bus arrived.

When he stepped onto the bus an hour later, his wings now poking through two slits in his t-shirt held shut with strategically placed pieces of duct tape, the other children slowly turned from their conversations to stare. After a few moments of stunned silence, they crowded around him, pushing and shoving for a better look. They examined where the wings met the skin of the boy’s back and felt the appendages with their hands, their small fingers nestling between the feathers.

The wings were wide enough that the boy now had a seat all to himself, so he was already seeing some perks.When he first walked into his classroom, the teacher fainted. In the absence of smelling salts, one child kindly removed a sock and pressed it into her nose. After jolting awake, she summoned the principal, the school nurse, and the school psychologist, who all determined that this problem would require some serious thought and consideration.

For now, they moved the boy’s desk several feet behind the rest, so that his wings wouldn’t block anyone else’s view of the whiteboard or swat out and hit the other children. He didn’t seem to have complete control over them. At recess, a number of children set out to find the winged boy whose story had spread throughout the school. Upon spotting the wings, they quickly converged around him. The teachers assigned to recess monitor duty were huddled near the building, rapidly discussing the boy’s “situation” and all assuming that someone else was watching the children.

After stares, pokes, and a few unceremonious yanks confirmed that the wings were indeed real, the group of children paused, uncertain of how to proceed. After a few moments, a small, mousy child with mismatched shoes pushed his way to the front of the crowd. He looked the boy up and down and then spoke in a voice that seemed somehow too large for his body.“Where’d they come from?”

Well this was hardly a satisfying answer. The child with the shoes tried again.“Can you fly?”

“You hope so? You don’t know? They’re your wings.”

“I haven’t had time to try them out yet.”In this sort of situation, there was only one demand to be made.

The boy paused. He looked into the expectant faces of his schoolmates. He glanced over at the teachers, huddled nearby, at the school’s edge. Then he turned and looked up into the sky, at the sun still shining bright, illuminating every earthly action. “No.”

The boy shrugged. “Not really.”

“Okay.” The boy edged past the group gathered before him and headed to towards the jungle gym. It had been ages since he’d used the monkey bars. The rest of the day passed without ordeal, and the bus ride home was less eventful than the one to school. The novelty of the wings had now faded among the children, especially since word had spread of the recess incident.

When the boy got home, he asked his mother once again about flying, but she just said that homework came first and herded him up to his room. She saw little purpose in flight if he couldn’t master basic multiplication.

When he came downstairs that evening, he found her in the kitchen, throwing a pizza in the oven and conversing with the boy’s father over the phone regarding what exactly he might have been smoking in the summer of two thousand and eight. Her back was to him and she didn’t seem to have heard his steps, so he headed past the kitchen and out the front door.

The sun was just beginning to set, and the cars of the neighbours had returned to their driveways for the night. He walked over to the large pine tree that stood beside their house and began to climb the lowest branches. The boughs were close together, piled one right next to the other, so he had to scrunch his wings close to his body to fit between them.

As he ascended, pine needles scratched at his face and hands and sap made his fingers sticky. As he neared the top of the tree, he turned and scrambled onto the edge of the roof with a small jump, landing with the front half of his body on the shingles and wrangling his lower half up after it. The jump was just far enough that his wings fluttered a bit in response, and it sent a thrill up his spine.

He stood and turned towards the open air stretching beyond the roof. He spread his arms wide, and his wings followed. He closed his eyes, and with a final, deep breath, he jumped.

It had been two months since he first saw the bird programme on the nature channel. Parrots with sapphire wings gliding through the dripping rainforest. Peregrine falcons diving at two hundred miles per hour. How a hummingbird’s shimmering wings whipped back and forth faster than the eye could perceive. They said that arctic terns travelled from one end of the globe to the other every year, heading south from Greenland each fall. They followed the light of the sun, seeing every sight on God’s green Earth.

For a moment, he was falling, and then his wings kicked in with muscle memory he didn’t know he had. He rose above the yard and began to glide over the neighbourhood houses, their neatly ordered gardens and screened-in porches. A dog caught sight of him and began to howl. He soared higher, away from the houses in their pristine rows, the streetlights that would soon turn on to blot out the stars. The hum-drudgery of human civilisation. The darkness quickly filling the skies would cover him as he flew, shield him from the eyes of those who might try to stop the flights of little boys, to call in others to pull him back to Earth.

He looked to the setting sun, hanging bright and flaming beside him, and determined that he was currently flying north. Winter would be coming soon. He headed south.

This short story appeared in The Growth Issue of Popshot Quarterly. On sale now.