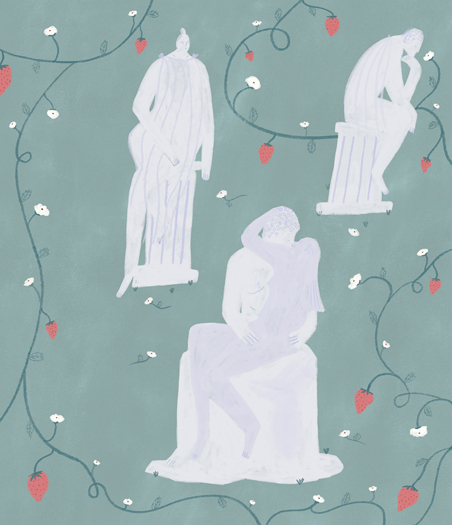 MY FLATMATE, HER NEW BOYFRIEND AND MY EMOTIONAL AVAILABILITY

This piece of flash fiction by Ellie Brundrett was inspired by the different kinds of intimacy we experience as humans. Illustration by Sarah Wilson

I woke up to the sound of them having sex in the shower. I recognised the rhythm of Hannah’s breathy moans and Ian’s deep grunts through the thin walls, reaching their crescendo as I gained consciousness.

Having abandoned my attempt to get back to sleep, I was sitting in the living room enjoying a black coffee and the weekend papers when Ian appeared. He was naked on top, with a towel wrapped loosely around his waist: a view I’d prefer to avoid. I politely averted my eyes from his hairy nipples (an evolutionary mistake if you ask me), and noticed that he was enthusiastically brushing his teeth with Hannah’s toothbrush: the bamboo one. Disgusting.

The final straw came when they joined me at the table for their breakfast. Not only did they proceed to feed each other mouthfuls of pancake, kissing after each bite as if they were recreating a scene from Lady and the Tramp, but Hannah actually used her finger to pick a strawberry seed from out of Ian’s front teeth, where it had become stuck. As she began crooning about what a “mucky puppy” he was, I felt it was time I fled to the solitude of my bedroom.

When retelling the experience to my boyfriend Jamie later on that day I embellished the details a little, adding some picking of bogies for good measure and suggesting they’d probably take communal dumps if our bathroom had two toilets. I wanted to make him laugh, for him to wrinkle his nose at their obscene oversharing in the same way that I had done.

His response of, “At least they feel comfortable enough with each other to shower together,” came as a bit of a surprise. Naturally, I demanded to know what that was supposed to mean, to which he replied that he wasn’t sure this was working, and perhaps we should take a break for a while. Something about my being emotionally unavailable, and wanting to be with someone who actually likes him as a person.

I laughed at this. “You seem quite happy to put your cock in my mouth, whether I’m emotional available or not.”

According to him that was the problem, that I only seemed to care about sex. I told him to go fuck himself, asking whether his hand was more emotionally available than me as he proceeded to walk away.

This piece of flash fiction can be found in The Intimacy Issue of Popshot.