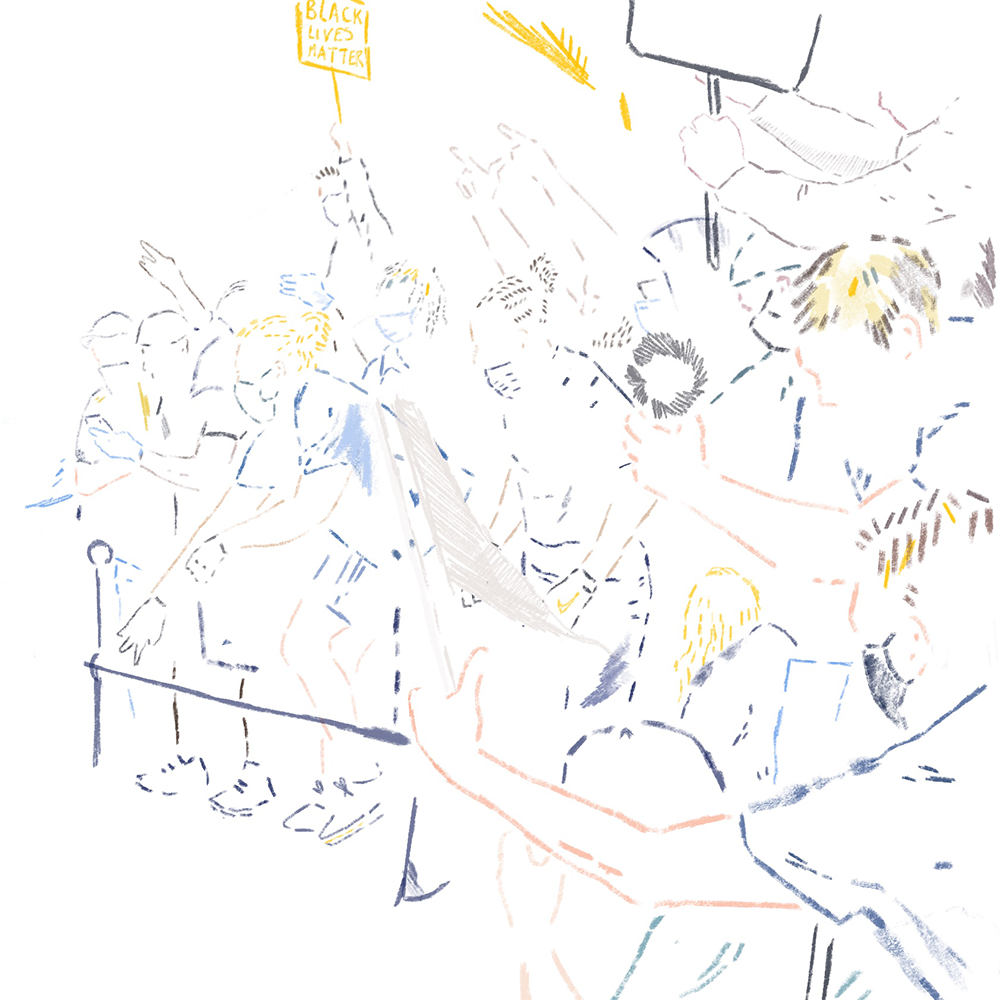 Lucy Thorneycroft’s flash fiction examines the weight of history on a place, inspired by the toppling of the statue of slave trader Edward Colston in Bristol. Illustration by Lizzie Quirke.

On a sunny day in the city of Bristol, Esme stumbled in the street. The tip of her boot caught against a raised paving stone and she clattered to her knees. There was a small golden square of metal on the floor: Fugra from Freetown. Enslaved 15 years old. Arrived in St. Helena 1731. Died of tuberculosis 1735.

The feet of commuters, screaming children and shoppers beat the pavement as Esme crouched on the concrete. Another raised stone glinted next to the first:

Another and another metal plaque erupted out of the smooth stone.

More appeared on the road, in the doorways of shops and restaurants. People started to stumble and fall over them. A man fell heavily beside Esme, his phone bouncing onto the ground, the voice on the other end still jabbering. He grabbed the phone, stood up and continued yelling into it as he weaved his way down the street.

“Who the hell are these people s’posed to be?” said a young woman as her eyes and fingers flickered over the new stones.

“Don’t know,” replied her friend. “But they hurt like hell. Bloody annoying.”

The two women helped each other up, glared at the metal plaques and strode away with their shopping bags banging against their hips.

Esme saw another woman with dark skin rubbing her eyes and mouthing silently as she stared at the stones. A white man held her arm, but she didn’t seem to notice.

A siren started to draw closer and soon blue lights flooded the street. A loud speaker announced the clearance of the area and the immediate evacuation of the road. Esme felt people bang into her body as they swarmed up. The crowd stumbled in confusion over the stones. The once well-known street, had become unfamiliar and uneven under them.

Police cordoned off the end of the road and the side streets, ushering people away and shouting for people to get a move on.

“What are you going to do with those stones?” Esme asked a policeman.

“Whatever the council decides to,” he replied. “Our job is just to clear people.”

Esme was ushered behind the temporary barriers. She looked back to see a woman standing in the middle of the street. Her fist was raised above her head and her eyes were fixed on the stones. She opened her mouth but before she could speak a police officer walked over to her, blocking her from sight. Another officer took Esme’s arm and asked her to vacate the area.

“I think it’s best if you went home for now,” the officer said. “This will take a while to clean up. Besides,” he said, looking at the sky. “I think it might rain.”

Esme walked down the side alleys, main streets and through the malls of the city. Road after road was cordoned off. Blue lights flashed against the golden streets. The sky was getting dark and spitting drops of rain started to fall on her face before she arrived at her front door.

The quiet of Esme’s flat was interrupted when she clicked on the TV. The screen showed the mayor stood outside the town hall in the light of journalist’s cameras.

“We have decided to remove the unauthorised stones which have appeared throughout the streets of Bristol. It is dangerous to provoke debate without understanding the consequences. It is important to the city that the full history is told. However, this history must be decided together. We, the people, must decide who we honour and where we honour them.”

Esme turned the TV off as a representative started discussing the public hazard of the new stones. Outside the window, she could see the reflective jackets of workers illuminated in the street lights. They were bent over the stones wielding pick axes, jack-hammers and there wa one solitary figure with a screwdriver. Some had jackets emblazoned with ‘Volunteers for the Protection and Upkeep of the City’.

The next morning, the stones still glittered in the streets. Unmoved. Undamaged. Undisturbed. Workers with red eyes and big yawns stood behind the barriers.

Esme lay in bed scrolling social media on her phone. It was flooded with images of the stones as well as hashtags, stories, articles and videos.

When Esme next walked out of her front door, she saw council workers drilling holes into the walls and hanging blue plaques. The descriptions on the plaques recognised the new golden stones:

The history of the trans-Atlantic slave trade and the slaves who were forced to labour within. Much of Bristol’s wealth and historical importance owes to the slave trade’s business in the British Colonies. However, it is hard to judge the actions of the past by today’s standards of morality and …

There was a sharp metallic noise. Esme stopped reading and turned. A teenage boy held a pair of pliers to a blue plaque. Esme watched as he pulled it off and placed it into a bag slung over his shoulder. He moved methodically down the street, stepping between the stones on the floor.

“We get to decide history,” he said before he disappeared around the corner.

A moment later a council worker rounded the same corner, took another blue plaque out of a bag and started affixing it to the wall. Once he had finished, he stood back and smiled before walking to the next spot. He tripped on a stone and stumbled over another before he came to a halt.

Lucy Thorneycroft is a teaching assistant and recent English Literature graduate from the University of Warwick. Her work has been published in Thrice Fiction, Cobalt, Kamena and some other small magazines and online publications. She lives in the New Forest in England.

“My piece was inspired by Bristol’s recent protests and the toppling of the Edward Colston statue into the harbour. I wanted to look at the aftermath of social upheaval in the city, what cannot be ignored and how historical monuments as interpreted and received. The idea of stumbling stones comes from Europe where they have stones in the pavement, which you literally stumble over, that have names and dates of Jewish Holocaust victims on. I wanted to explore how art can work with protest and how the difference in perspectives comes out in that art.”

This flash fiction appeared in The Protest Issue of Popshot.