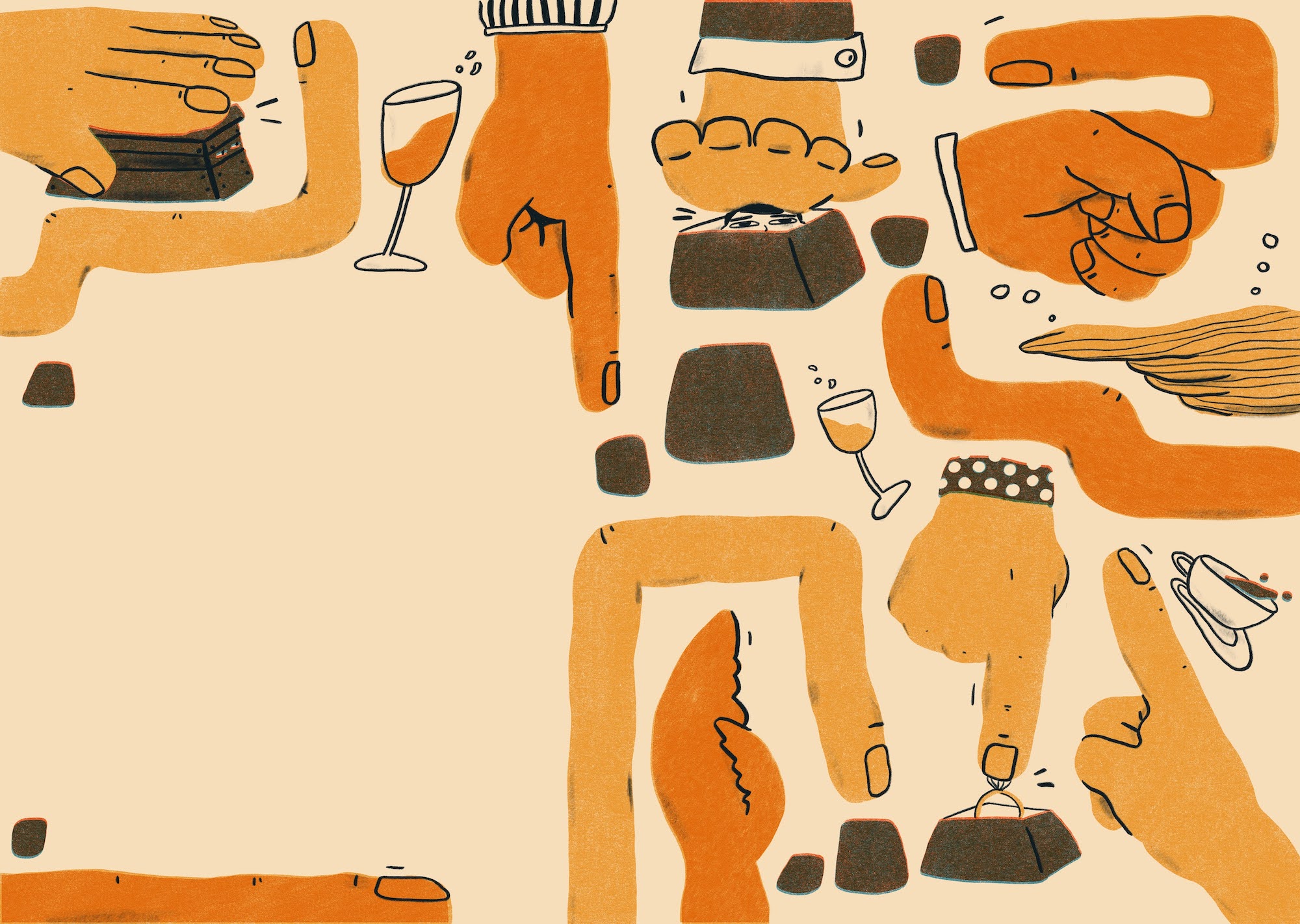 LOCKED IN A BOX

This comic flash fiction by Harry Guild examines how caged animals feel about humans fighting for their rights. Illustration by Vicky Hughes.

Kate looked at Pete as if he had just ordered her grandmother’s corpse, pan-roasted with Cabernet sauce and asparagus.

“You know they never see sunlight? And they spend every waking moment in a two-foot box?”

He did know. During isolation, they had both seen the same documentary on Channel 4, Locked in a Box: Veal or No Veal. Watching Noel Edmonds shout at Belgian cattle farmers, Pete had made himself two promises: he would never eat veal again and he would never, ever dye his hair.

“It’s just barbaric of you. It’s twentieth century. Worse than that, it’s hypocritical. You always give me shit about not being green enough, about putting black plastic in the blue bins, and then without even blinking you go and order veal. Can’t you see how unfair that is?”

“That’ll be all, thanks,” Pete said to the waiter, who collected the menus and fled at a velocity rarely seen in any restaurant, let alone a Parisian one. “Kate, I’m sorry. I had chicken for lunch and you know I don’t like sea bass. Can we please move on and try to enjoy tonight?”

“Ok, fine then,” said Kate, taking out her phone. “Let’s spoil our night.”

Pete stared down at the table he had spent two hours queuing for. His red face mooned back at him from a butter knife.

“I’m sorry, monsieur, we do not accept table reservations,” the maître d’ had slurred down the phone. “It is possible, however, to book a space for two in the queue.”

“The queue, yes. Typically, it is a thirty-minute déviation with complimentary tea.”

“What if I don’t book a place? Can’t we just join the queue?”

There had been a pause. “Monsieur, this is La Paresse Langoureuse. This is not your local Post Office. You cannot just wander in and demand a place in the queue.”

And so, he had booked, left work early, joined the fifty-deep queue outside the bistro that had once been frequented only by a few red-nosed old men but was now #2 on TripAdvisor’s Hidden Parisian Gems list, and inched forward in two metre stretches, mentally rehearsing his speech over and over (“Kate, it’s been the most incredible four years…”). By the time Kate had joined him, he was three complimentary teas in and sweating heavily.

All this, only to order the veal. His thoughts squarely on the little black box in his suit pocket, he had just said “the veal” as mindlessly as he would a “bless you”. And now here he was, thrown overboard, plummeting to the ocean floor, Kate some ever-diminishing speck above him.

A Gallic cough broke the silence. The waiter had returned. He stared at the floor as he served them.

“The baked sea bass in a chive velouté, mademoiselle. And for sir, the veal.”

Pete picked up his cutlery.

Kate turned to the fish on her plate. It was lying in a puddle of chive sauce, its body rising and falling as if it were breathing. She prodded it with a fork. “What, so you’re ok with eating veal?”

“Sure. Everyone weeps for the baby cow.” The fish spat a little as it spoke, spraying oily bubbles over the tablecloth. “But what about me, where was my choice? You think I spent my school days dreaming of stuffy French restaurants and chumps like you?”

Kate took a sip of Pinot. Four years of watching such sips told Pete the fish was in for a rough ride.

“I’m not a chump,” she said. “I’m a pescatarian. Fish simply aren’t sentient like cows are.”

“Don’t be so pig-headed,” she continued. “Every waking moment of that calf’s life was torture. You just spent yours swimming – that’s a hobby.”

“Mine truly was a most sorrowful existence,” said the veal, its flesh quivering like the skin of a hit drum. “I saw nothing but darkness and the slaughterhouse. Born into a death sentence. ‘Out, out, brief candle! Life’s but a walking shadow…’”

The fish rolled its eye.

“We didn’t choose this fate either,” wailed Pete’s asparagus tips in chorus.

“‘Now cracks a noble heart.’” The veal started to sob, fat globules of Cabernet sauce running down its sides. Pete stifled the urge to dip his finger in it.

Kate pushed her chair back. “I’m getting the bill. This whole night, from start to finish, has been horrible.”

“What’s wrong?” spat the fish. “Has your food disagreed with you?”

She looked around for a waiter, but managed only to catch the eye of a passing lobster platter. It lifted a claw and made the wanker sign at her. Pete put his head in his hands. The bass swivelled around on the plate to eyeball him. Waves of sauce followed in its wake, cresting the plate rim and spilling onto the table.

“I don’t blame you. We’re surrounded by side-dishes and shed-dwellers,” it hissed. “Is your wife always such a cow?”

Pete stood up. He grabbed the fish and held it close to his face. It spat at him, but he thought he could see something like fear appear in its eye.

And with that, he threw the fish into the ice bucket where Kate bludgeoned it repeatedly with a bottle of Pinot Gris.

They were swiftly asked to leave the establishment. Not for the violence, but on account of the passionate display of affection that immediately followed. Tables were climbed, shirts ripped. And as the lovers were escorted off the premises, a pot of steamed mussels broke out into song:

And you don’t belong to me, yeah yeah

This story appeared in the Freedom Issue of Popshot Quarterly.