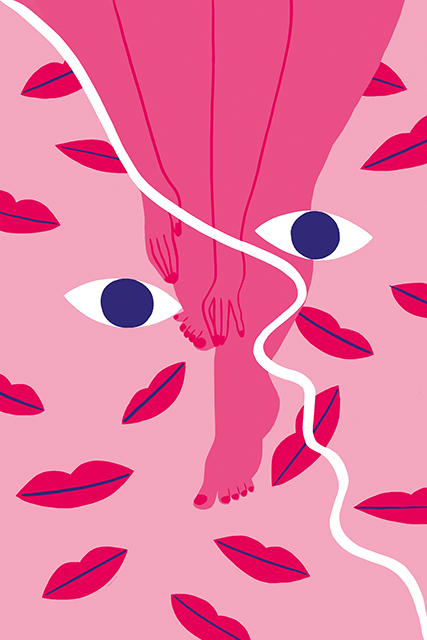 In Andrea Holck’s brilliant (and she would like to make clear, not autobiographical!) story, we find out what one woman is willing to do for £50. Illustration by Esther Lalanne.

A woman with an internet connection can find financial redemption at almost any time. I, a woman, an artist, do not have the energy resources for a full-time job. I do part-time work in a library shelving books and such, but the pay is not enough to cover the rent for my studio. So when money is tight (which is all the fucking time) I take on additional work.

I find it mostly on Craigslist. Mostly using the library computer, and mostly during my working hours. It’s not because I don’t have a phone, I do. It’s just that the job’s not exactly titillating, so I make up chores to do on the computer when what I’m really doing is getting paid to look for other ways to get paid.

I’m not really an artist. I only said that to make my situation sound nobler. I do paint walls in colours with names like aubergine and breath, which is something I recently did for cash. I also don’t have an actual studio, unless you count the single room I rent from a sad empty-nester. The rest is mostly true.

The thing is, I don’t have any specific skills to market, so I mostly respond to ads. I’m no idiot, I just always liked the artsy classes in school, which doesn’t turn out to be a predilection society is that into, fiscally speaking. So I find this ad that says: Got feet? Will pay.

I know right away it’s a sex thing, so I sit on it for a while. I’ve done some weird shit for cash, but never sex stuff. Not yet. Safety, you know. But I decide to dangle a carrot. My response is: Have feet, will travel.

Cryptic. Whoever it is seems confident I’ll know what the fuck they’re talking about. Four pm seems safe so I send a thumbs up.

I spend the rest of my shift imagining possible scenarios. A poorly-groomed socially inept reprobate, probably taking a break from playing Fortnite. Or maybe unkempt and hungover? He’ll open the door and I’ll say something like “Hey.” I should be chewing gum to add to the breezy nonchalance I’ll be emitting. I’ll push past him as he holds the door open, rolling my eyes and taking a seat on his ratty couch. Kick off my leather ballet flats, which I’ll already be wearing without socks. Taking off a sock seems wrong when I play it in my mind.

He’ll kneel before me, take my foot in his hand, probably sniff it or something. I imagine him whimpering with a sort of bizarre reverence. I’ll read my magazine while it’s happening. Maybe pop a bubble just to be a bitch. He’d probably like that. My assumptions of how it will pan out seem reasonable, if a bit cinematic.

Winchester Boulevard is lined with gleaming Mercedes and Audis, its buildings Victorian and impossibly clean. That it could be a teenager hasn’t occurred to me, but it’s suddenly obvious. He must be living with his parents. If he looks any younger than twenty, I’ll leave. I’m not gross.

I locate number 28, a terraced house joined to its neighbour like Siamese twins. Apartment Six is in the back, a tiny alley leads around the side where the walls are dingy and weeds poke through cracks in the concrete walk. This is closer to what I had imagined, although the general vibe has thrown me off a bit. At least it doesn’t seem like the kind of place where people routinely get murdered.
Before I ring the bell the door opens. From behind it comes a male voice that can’t possibly be a teenager’s.

I step through the door where I am told to wipe my shoes on the mat. Please.

The inside of the apartment is white and the only room I can see into holds a floating bookcase filled with books. Their spines are black or white or grey. Actual potpourri rests in a gold bowl on a tiny table next to me. The scent brings me back to my senses.

“You can leave your shoes on until you’re ready,” he says, stepping from behind the door. His face would be easy to draw; straight symmetrical lines, soft brown hair swept back from his face. He looks me in the eye. I feel shame and possibly love. I am willing to offer him anything at all. He can do whatever the hell he wants to my toes.

“Right.” I wiggle inside my shoes, sweat sticking my toes together like cement.

“Here goes nothing,” I say. Idiot. I step out of my shoes and watch him, expecting him to respond to my bare feet in some way. Maybe I have it wrong. Maybe this isn’t a sex thing. Maybe he’s a podiatrist. Or a shoe designer. Or a sock engineer. Oh god, deliver me.

He leads me to the living room and motions for me to sit down in a yellow chair, the only coloured item in the room.

“I’ll need to be under you,” he says, standing in front of me.

“Women like you are mythically rare,” he says. I do not know what to say to that. The only thing he knows about me is that I have feet I am willing to sell like cheap candy. I mumble, kind of half-smile and giggle. I want to die.

“A woman who is willing, I mean. It’s harder than you would think.” He lowers himself before me, bending both knees to the ground simultaneously.

I mean, what am I going to say at this point? Ask to take it slow? For a glass of wine? This is not a date, although it could be the end of a very good one for how heated up I am feeling. I ask for a glass of water, anyway. Just to take in my surroundings.

So, he’s fitting me into his schedule. How typical. I watch him walk away to fetch the water. I imagine him naked, of course. It’s only natural. By the time he returns, I’m pretty aroused. He hands me the water and straightens his tie.

“Thanks.” I attempt a seductive expression. He sighs. He lies down at the foot of the chair.

“Place your foot on my face.” I wince. I can actually smell my putrid foot. I start to apologise.

“I’m so sorry, maybe if I could use your bathroom I could freshen —”

I place the sole of my foot against his cheek and quickly withdraw. The sole of my foot is ticklish, and if I’m not careful I might laugh. I bite my tongue hard and replace the foot. I feel the course stubble on the thin skin of my arch, my toes feel around his lips and he slips his tongue out to taste one. It’s slippery and warm, a contrast to the cold white room.

Holy shit. I peek down, afraid to make eye contact. Remember, I am not supposed to be participating. His eyes are closed, his brow creased in concentration. I watch him turn his head slightly for a better angle to take the toe into his mouth. I can’t help it: I moan. I peek again to find him staring up at me.

“Please don’t,” he says simply, then closes his eyes again. “Other foot.”

I swap out the feet, and again, he starts. He takes a whiff, a little lick, a taste, and then one whole toe is in his mouth. I clamp a hand over my mouth, squirm in my chair, need to cross my legs, do something to take the edge off.

He stops. I see him looking at me. Disappointed. Unimpressed. Bored.

Devastation. He leads me briskly to the door, opens it, and hands me a fifty.

He thanks me with such comportment I am tempted to bow. Had I not been so crestfallen.

“I’m mythically rare!“ I want to yell at him. To thrust the money back and offer my feet for free! Forever! For whatever! I’ll control myself!

“Can I use your bathroom?” One perfect eye brow lifts skeptically. “Er, I’ll be very quick. I have a long way to walk.” It’s true. Another sigh.

“Down the hall, on the left.” He doesn’t shut the door.

I won’t say too much about what happens in the bathroom, only that I don’t flush (I hope he’ll find it alluring) and I do not wash my hands. When I return, he is already outside smoking a cigarette. A black cigarette. The way he smokes it disturbs me. He pulls on it so hard his cheeks hollow out. I imagine it’s my nipple. I have to get away.

“Later, then,” I say. I feel it’s best to come off casual. He doesn’t say anything, just tilts his chin up at me and ashes his cigarette. I walk away mechanically.

I left the money in the bathroom.

Side Gig features in The Fantasy Issue of Popshot Magazine