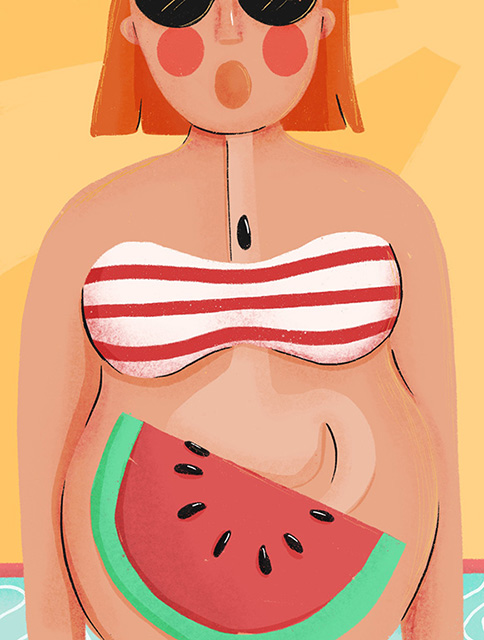 If you eat a watermelon, a baby will grow in your belly. That’s what mama always told me.

I avoided eating watermelon until that one really hot day at the summer carnival. Bobby Jenkins and I went skinny dipping in Sander’s Pond and afterward we sat half-naked by the water’s edge and ate slices of watermelon until our fingers were red and we were both wearing less than we arrived in. We were both sweating by the time we got done swimming and snacking.

I remembered my mama’s warning when it was too late. I swallowed one slimy black seed. I felt it land with a plop in my stomach. I asked Bobby to try and suck it out of me and he tried but we both knew it was all over.

By the time I went back to school, my stomach was the size of a cantaloupe, stretched summer peach-y skin that hadn’t been burnt by the constant Alabama sun. I tried pushing it down and hiding it under sweatshirts when everyone else was stripped down to tank tops and shorts.

Just as mama’s garden spit out piles of pumpkins, my belly reached gourd stage. She loaded pumpkins up in her wheelbarrow and me into her wood-panelled station wagon.

Dr. Smith had a voice and bedside manner that matched his name. Bland. Ordinary. Plain. He touched my belly and set off some kind of sparky tweed-induced friction. I jumped back in the stirrups that weren’t made for horseback riding. Mama clutched her not-pearls.

“Sit still,” she told me, as if I were a child and not carrying a sweet watermelon under my skin.

Dr. Smith turned to my mother. “She’s about four months along. Probably due around Easter.”

Mama burst into tears. I didn’t know why. Having watermelons in the off-season was something rich people did. I wasn’t looking forward to carrying this watermelon that long though. It was getting heavy. My back hurt like when I helped bring in the corn crops.

“Watermelons in early spring are for rich people, mama. It’s a good thing.”

“Who did this?” she hissed at me like my brother’s bearded lizard that lived in a cage by his bed.

“I did. By the East pond. We ate almost a whole watermelon after we went swimming.”

She grabbed me by the arm and drug me off the paper-covered doctor chair, throwing my jumble sale sweatshirt and stretchy pants and Wednesday underpants at me. I ate a lot of watermelon that year, sucking down each slice and spitting out the seeds into the grass.

Four months later, I couldn’t wear my Jordache jeans or even my gym glass sweatpants. Mama took me to the hospital. I gripped my tight, full belly the whole way wailing along with the ambulance siren.

Blood red juice dripped across my belly when they sliced it open-smile-style. I heard the watermelon crying as they cut off its vines from inside my belly.

“Can I have a slice, mama?” She smiled as shook her head and called for the nurse lady.

I named that watermelon Trudy and she played by Sander’s Pond with me as I read books and did math.

This piece by Amy Barnes appeared in The Mystery Issue of Popshot Quarterly.