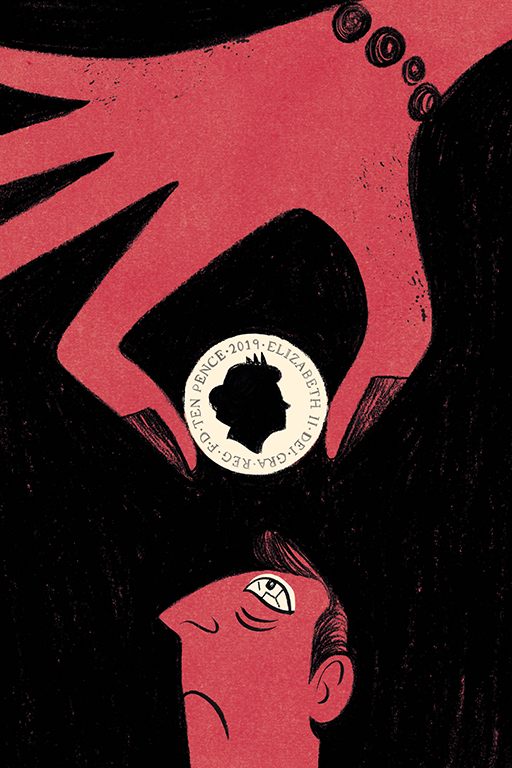 In Jessica Squier’s brilliant short story we learn that the toss of the coin may not always bring random consequences, especially when love and friendship are in play. Illustration by Shane Cluskey.

“You are your own worst enemy,” I say.

Here we are again. It’s Friday night and I’m in the pub with Ben trying to sort out his messy relationship problems. He’s been married to Helen for around twelve years and shagging his PA, Amy, for the last two years.

Some people just have everything handed to them on a plate and Ben is one of those people, all courtesy of Daddy and Mummy. Top notch private school, university and, after that, he went straight into the family media business at management level.

Whereas I – well let’s just say I didn’t have it so easy. Not that I’m Oliver Twist or anything. I certainly never felt underprivileged until I met Ben. I’m his oldest friend. Not age-wise but in length of loyal service.

We met about twenty years ago in the first seminar of our economics degree at university. He was good fun to be around in those days. I mean, he’s always been a bit of an arsehole, but he used to be charming with it.

Not that I’m ungrateful for what he’s done for me over the years. The holidays, the odd loan to tide me over and he even let me stay in his spare room for a few months when I was going through my divorce. It was then that I got to know Helen a lot better. To say that she is too good for Ben is an understatement.

I’m sure he loves her, in his own way. I get the impression that she knows about some of his dalliances, but not the full extent.

I’m sure she doesn’t know about the current one.

Amy is in her mid-twenties, pretty and bubbly, and completely lacking in morals, so I can see the attraction. She has definitely proved more resilient than her predecessors.  Maybe because she comes from the same kind of privileged background as Ben, she knows how to play him at his own game. She’s got him running after her and the pressure is starting to have an impact. That tell-tale stress vein is constantly pulsing in his forehead nowadays.

He’s always been attractive to women, and not just because he’s rich and good looking – in a baby-faced kind of way. He’s perfected this kind of bumbling, apologetic, ‘I can’t tie my own shoelaces’ persona. All of this, combined with his desperate need to be liked, seems to be potent stuff for the opposite sex.

I’ve tried to refuse to be his permanent alibi, but then he puts a massive guilt trip on me. There have been some tricky moments when Helen has come close to finding out. Clearly it’s time for a different approach. It’s crunch time.

“Why don’t we toss a coin on it?” I say, taking a ten pence piece out of my pocket and holding it between my finger and thumb. “Heads, you go with Amy. Tails, you stay with Helen and try to make it work.”

His eyebrows scrunch together and he stares at me like I’ve completely lost the plot. But I stay poker-faced.

“I can’t do that, mate,” he says. His face is blurry-red with drink.

“Suit yourself.” I fold the coin into my palm.  “I’m not going to lie for you anymore or sit in the pub listening to you whinging. This is the end of the road for us.”

For a moment, I think it really is game over, but then he puts his hand to his chin and nods his head a few times, thinking it through.

“All right,” he says, rubbing his hands together. “Let’s do it.”

My heart is thumping as I throw the coin in the air.  It lands like a dead weight on the wooden floor by my feet.  I can almost hear the thud.

We peer down, both sweaty and excited.

A rush of air comes out of Ben’s mouth, and he leans back in his chair, hands on top of his head. For an uncomfortably long time, he’s wide eyed, open mouthed, staring up at the ceiling.

“Can it really be that easy?” he says eventually.

He stands up, spreads his arms wide, and bellows: “The gods of chance have spoken. Who am I to go against them?”

The lads who are playing pool nearby turn to look at us and start laughing, thinking we are a couple of weird old gits, no doubt.  Then Ben hugs me tight. When he lets go, I can see tears in his eyes. “Thanks, mate.  You’re a really good friend.”

“I think we need some more alcohol,” I say. “Maybe a glass of brandy this time?”

He shakes his head. “I need to go. Get the wheels moving, I suppose.”

I watch him walk out of the pub, phone in hand, jacket slung over his shoulder. I’m basically gambling on the fact that he will never admit to anyone that he threw his twelve year marriage away on the flip of a coin.

Whatever happens, this is the end of our friendship.

It was surprisingly easy to buy the doubled headed ten pence piece online. You can get them from loads of places these days. I knew he’d never bother to check it, but I still made sure he was really drunk before trying it.

Nothing’s guaranteed, mind you. I will need to position myself carefully as far as Helen is concerned. Beautiful, lovely, kind-hearted to the point of being gullible, Helen. I’ve already established myself as her dependable ‘shoulder to cry on’.

I’m itching to send her a text right now, but I need to keep my wits about me.

All I can do is wait and see how it unfolds.

Playing The Game appears in The Chance Issue of Popshot Quarterly.