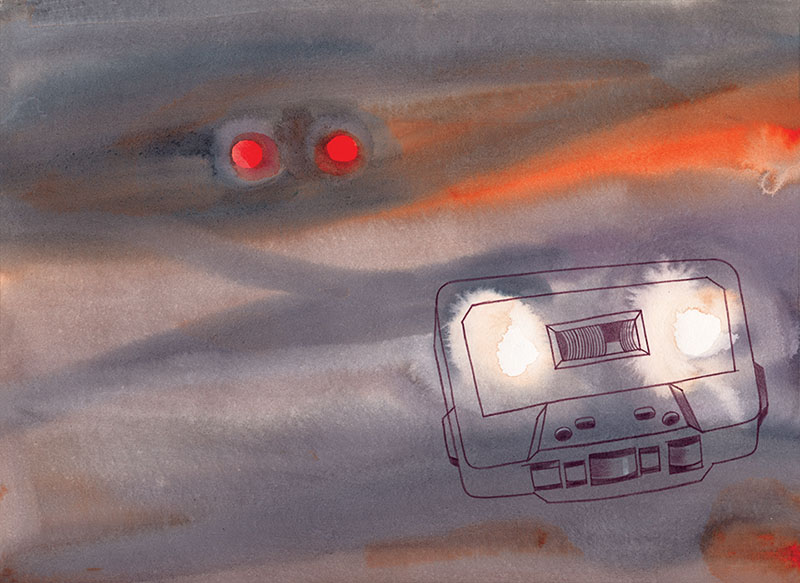 This flash fiction by Luke Larkin which featured in The Nostalgia Issue of Popshot was inspired by his father’s cassette tapes. Illustration by Toby Morison.

Dad lived in a time capsule because Mom wouldn’t let him in the house. It was an old Buick station wagon, the kind with a rear-facing backseat so that you could ride face-to-face with the other drivers and wave at them, then flip the bird if they didn’t wave back. Only a handful of seatbelts still worked, and you had to crank the windows down yourself. He kept polaroids of us in the glove compartment, outdated maps of old family trips on the dash, a box of cassettes in the middle row. He had no concept of obsolete.

One night in the summer, he dropped by just after dark and honked until Mom stormed through the screen door and sniped him dead with her one good eye. I flew past her across the lawn, wet with sprinkler dew, and dove through the passenger seat window, not even bothering with the door handle. We went for soft serve, then found a hotdog stand and ordered two with everything on them. He asked how school was going and I just said, “It sure is going,” and he nodded. I asked how work was, though I knew by the piles of dirty clothes in cardboard boxes in the trunk of the station wagon that it wasn’t going well. I asked when he would come home, and he said he was home right now, wasn’t he? I said permanently. When are you home permanently? And he said when your mom wants me permanently.

Then we just drove. Through the neon of the city and onto the empty eight lane highway and eventually into the mountains where the station wagon sputtered along the moonlit switchbacks. When the radio signal cut out, I dragged the box of cassettes into my lap and flicked through them the same way Mom flicked through her card-box of recipes, written in swooping cursive on index cards. The Eagles, Fettuccine Carbonara, Springsteen, Bacon-wrapped Scallops. My finger landed on a tape without any markings cradled in a fluorescent green plastic case. What’s this one? I asked.

Dad glanced over and his expression flickered between possible responses. His brow raised and his lower lip drew back, ready to click into either a grimace or a smirk. Eventually, he chose the smirk. Wedding tape, he said, and I popped it into the deck before he could say anything more.

Waves crashed on a beach somewhere, steady and calm, before a pulsing synthesiser introduced a sparse drum. Annie Lennox sang Mom’s name over and over as the synth swelled and chimed and Dad just kept his eyes on the road and I kept my eyes on him as he held his left hand in his lap and stroked a gold band with his thumb. As hard as I tried to conjure images of her strong hands and slender fingers, in that moment I couldn’t remember if Mom still wore hers.