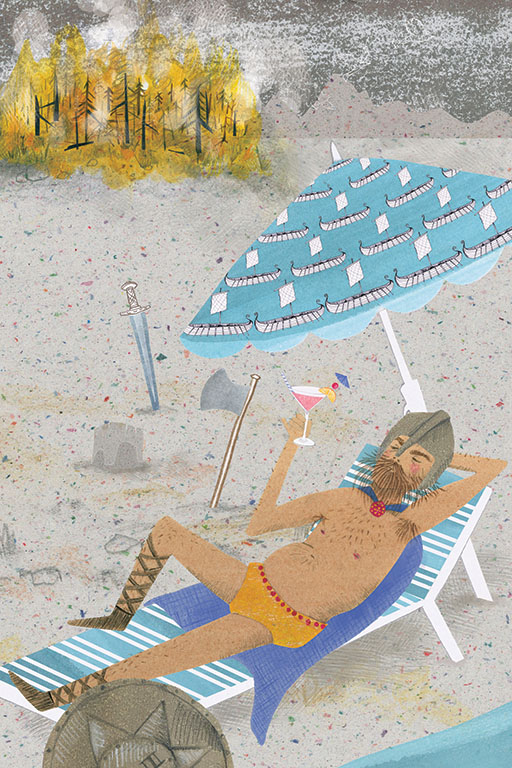 This piece of flash fiction by Alice Spotorno was inspired by a wooden Viking that stands at the entrance to her local park. Illustration by Charlotte Price

Erik lives in the woods just down the road. Proudly erect, he stands guard by the steps that descend from the muddy, windswept fields into his realm of moss, mushrooms and utter placidity. Tranquil sounds of pine needles dripping to the ground, soft chattering, and the occasional twitchy nose. Birdsong and children in fair weather, squelching puddles and roaring rain in winter. In other words, hell.

A long cut slashes Erik’s helm and his left eye. In his hands, a weather-beaten shield bears a date: MMXIII. That was the year he was carved. Day in, day out, Erik dreams of days long gone. The trickle of dog piss on his legs reminds him of the sea beating against his shins, as he prepared to land with his brothers-in-arms on undiscovered shores, senses tingling and alert at the prospect of battle. When snow falls and covers his head with a soft mantle, he remembers the feeling of velvet drapes brushing on the tip of his nose, and the sweet sweaty smell of a squealing maiden in his arms.

Long has he endured this curse. Once, during a raid, he was captured by a witch. Matted tangled curls and swoops of golden metal circling her upstretched arms, she enunciated foreign words and his spirit was trapped. Erik the Viking was no more, and became Erik the Pine.
Children now clamber along his back, their tiny fidgety hands clinging onto him as the fastenings of his armour once did. Sometimes a deer brushes against him in the dead of night, all watery eyes and bristly fur. How he used to enjoy hunting, the thrill of the chase, heart drumming and mouth salivating in anticipation. A thousand years and more he has been wooden, and yet he still remembers the taste of roasted meat. A thousand years and more, and he is no closer to escape than on the first day.

What Erik yearns for most, more than companionship, more than human touch (he gets plenty of that these days with the kids, though he misses the tickling patter of birds and squirrels from when he used to be a live tree), more than sailing and pillaging and raping, is fire. The golden aura cast by a flickering torch on stone walls, the pool of yellow against the sky from a flaming village, the searing heat of flame against crackling flesh, dripping fat onto the embers.

One night, he sees a spark and his hope flares up like kindling in the hearth. It flickers and dances, dies out; then reappears. Chittering and loutish laughter accompany it this time. In the depths of the woods, somewhere, a group of younglings have lit a bonfire. He can taste the smoke in the air. Steadily, the glow grows larger. When had the last rain been? Summer was on the horizon, he knew that much.

Soon, he found himself praising Odin for the gift of human stupidity, for the sense of untouchable immortality that lives within the young. As the sounds of fire swell around him, a sense of panic takes over the ordinarily peaceful park. Had Erik had lungs, he would have sighed in relief. After all, he relished panic, the adrenaline that came with it. Thundering past him, a group of teenagers run for the field, eyes alight with terror. Had Erik had facial muscles, he would have smiled. This is the moment he’s been waiting for. Despite the wooden fibres of his body – or perhaps because of them – he feels alive.

All around him creatures flee. The night is orange, and fierce. Erik can see it now, eating its way across the path, rapidly engulfing everything. Glee, hunger, lust swell over him as the fire finally envelopes his stunted shape. Then comes the pain. Welcoming this change from the sedated apathy, Erik relishes every scream of his nerves, every crackle and pop, as he goes up in flames.
Ash. Firefighters step everywhere, extinguishing the last pockets of smouldering vegetation, walking across a moonscape of death and blackness. Dismay. Villagers come to observe the disaster, their hearts sinking.

A gust of wind, then more to follow. In a whirlpool of white dust, Erik takes flight, soaring above the blackened stumps of what was his prison for a thousand years and more. Making his way beyond the glistening sea across the rainbow pathway to where he belongs, Erik’s consciousness finally begins to dissolve. The curse is lifted, and he can re-join his companions at last in the halls of Valhalla to share stories of glories past and await together the battle to come, after a thousand years and more.

The Wooden Viking is from The Escape Issue – Issue 24. Order your copy here