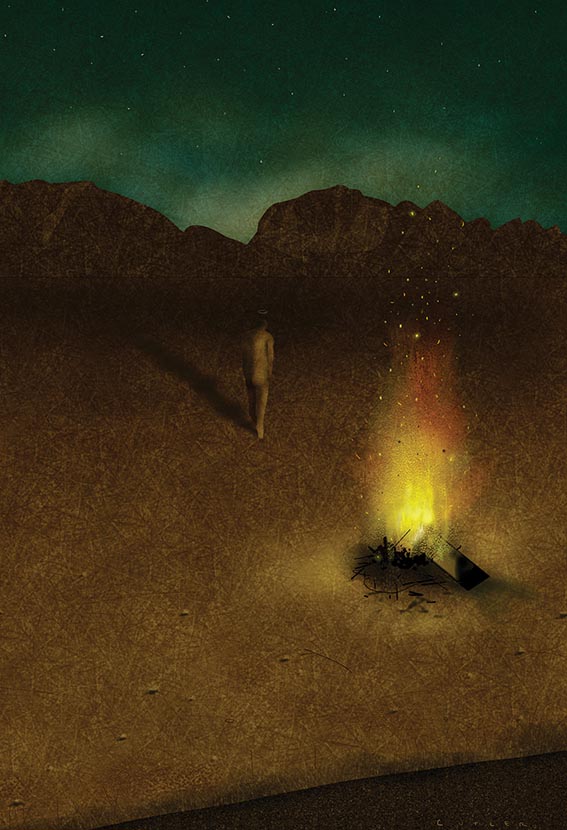 Saint Merle of the Desert

Lee was already into his second cup of decaf when he saw Caryl pull his pick-up into the Black Bear Diner parking lot. He folded up the Visalia Times and watched Caryl lock the truck door after getting his cowboy hat. There was that mutual nod of acknowledgment as Caryl walked in behind a family whose bleary-eyed children did not look to be in a travelling mood.
“I’m guessing you read the same thing I did this morning,” Caryl said as he seated himself.
“That I did.”
“So, they’re saying they have nothing in regard to leads.”
“Who is they?”
“The cops. In New Mexico. I thought you said you read it.”
“Right, right. I did. Okay.”
“They have nothing to work with. When I was on the phone with them the other day, they were getting ready to talk to investigators and behavioural specialist people.”
Lee started fidgeting with the coffee creamers. “That sounds like it,” he said nodding. “To analyse him. To come up with speculations then draw conclusions. That figures.”
Both men paused as a waitress brought coffee. Outside, they could see the pale morning light shine on the Southern Sierra Nevada mountains.
“So, for right now, it’s anybody’s guess as to why Merle might have done this and where he disappeared to.”
“Aw, that’s just nonsense. Why else would someone park a U-Haul on the side of the 81 highway, pull out all the things that tied him to life—his coffee machine, his two-thousand-dollar big screen, the diplomas, his custom suits, his iPhone and iPad, the laptop, all that stuff—and just dump them onto the highway, then strip down to nothing, toss whatever it was he had on into some improvised bonfire, then walk bare-assed out into the open desert, looking for a hole to live in like some kind of hermit?”
“Yeah, well, we know the answer to that one, don’t we?”
That was Caryl, unwrapping the silverware from his napkin.
“What I want to know is how this didn’t happen sooner.”
That was Lee, questioning the complexity of a man’s patience with the world.

Saint Merle of the Desert is from The Identity Issue – Issue 23. Order your copy here