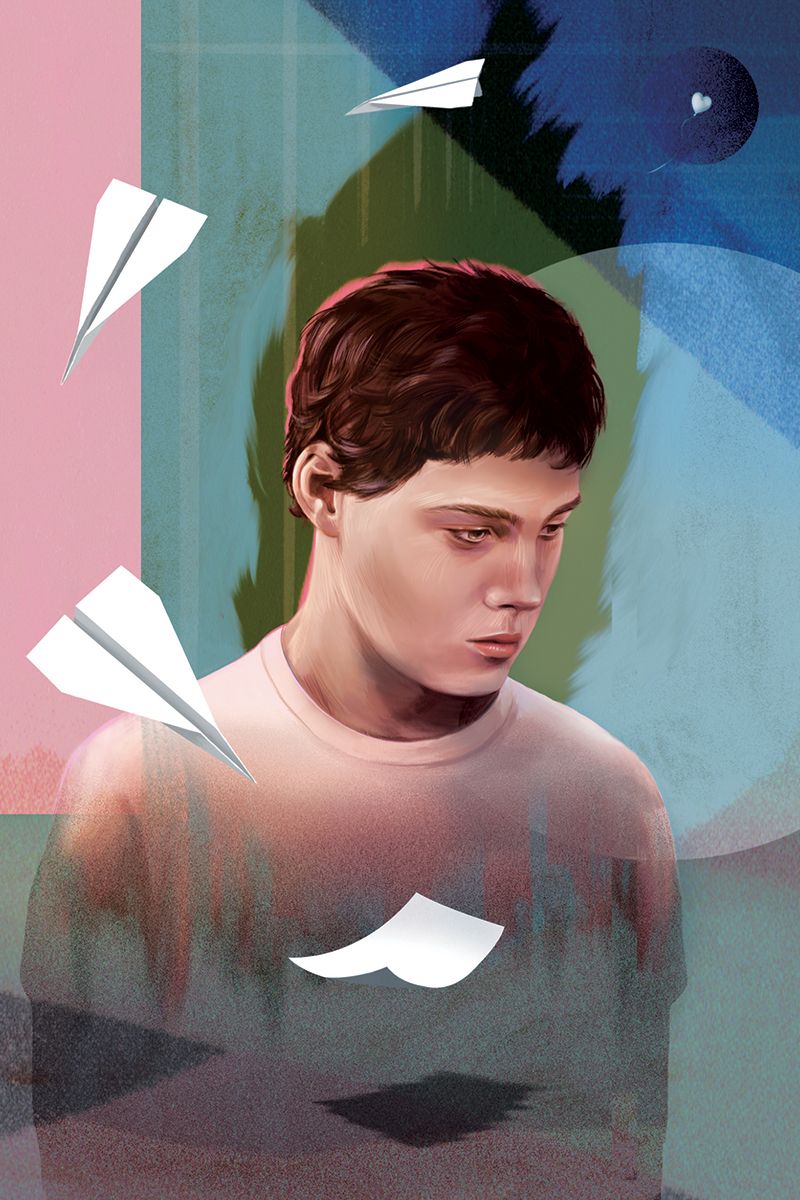 WE MISSED FLYING THE MOST

A boy longs for his girlfriend – and sleep – in this bittersweet story by Lydia Ruffles. Illustration by Ruth Kingsbury

Alex finds a hot corner and sits with his back to the pepto-pink sky and sticky tarmac. Planes roar overhead as he scans the room for Maya, remembering the first dream of hers that he heard here.

Maya isn’t coming, but the part of Alex that knows this hasn’t told the rest of him yet.

The other members of Awake Anon must be wondering where she is, whether she’s relapsed, too. Nobody asks. It’s meant to be anonymous after all, this place where the sleepless come for community and to trade memories of the thing they miss most: dreams.

Mo thought people might come from afar so she’d established the fellowship at the airport hotel. There’s a great view of the runway and they can see into Departures, but floor-to-ceiling glass hems the travellers in too so no one ever crosses.

The fan is broken. A damp circle forms between Alex’s shoulder blades. The same shape that Maya’s wet plait used to make on her T-shirt after a shower. She hated it when he spoke of her body in parts. He can’t bear to put her pieces together in his mind yet.

‘Where’s Jaz?’ Alex whispers to one of the newbies.

‘Got some good sleepers off French eBay. €5 a pill but worth it.’

Talk turns to whether trains or taxis are best for dozing. Alex doesn’t mention that he and Maya took turns chauffeuring each other at night or that now he watches Ubers beetle around on his phone instead.

Later, as he sets his nine alarm clocks, he wonders if the group wishes Maya had returned instead.

Each night’s interrupted sleep dissolves Alex’s reality. His memory is shot. He can’t get hard like he used to and sweats whatever the weather. But the memory of his first Awake Anon meeting never changes.

Maya’s was an anxiety dream, too.

‘I used to work in a theatre,’ she said. ‘There was this play where the audience were all given a heart-shaped balloon to release when they fell in love with a character.’

He’d smiled at the clever sweetness of this.

‘In the dream, it was me on stage. I was naked, looking out over this red wave and all I could hear was pop, pop, pop. Hearts bursting everywhere.’

Alex put his hand to where a lump had formed in his throat, spreading his fingers around his neck to hold himself in.

He got to the next meeting early and tied a balloon to Maya’s chair. His cheeks glowed as bright as its foil as it bob, bob, bobbed behind her and he tried to catch her eye.

Two meetings later – high on desperate tales of insomnia, almost-sleep, nightmares – Alex asked Maya if she was tired. She wasn’t and agreed to coffee, which turned into a long night at the hotel bar. They tumbled into bed just as the first morning plane hurled itself into the pillowy clouds.

An alarm shrieks. Alex backhands it, the movement startling a dream-wisp that had started to coil through his mind.

The faintest imprint hazes the air as he uncurls his arm from the sling he wears to bed sometimes.

Tiredness stretches his brain. It starts to think about things without asking him first. He tries to wind the thoughts back in but they return misshapen, as if they aren’t his anymore.

Maya and whisky-wet tongues and sweat-stained sheets. Echoes of things he’s not meant to miss because he’s a guy. A summer spent whispering secrets, disinhibited by darkness.

‘What would you do if you were paper?’

‘Fold myself in half and climb inside your pocket.’

‘What would you do if you were water?’

‘Am I still paper in this scenario?’

‘Shut up. What do you miss most about dreaming?’

‘We could buy a trampoline.’

‘Come here, stupid. Cuddle me in.’

Alex looks around the shimmering sweatbox through half-closed eyes, exhausted. If only he could tell the rest of Awake Anon about his almost-dream without revealing himself as a fraud.

Someone hands him a cup of thin, black coffee. The fan is still broken and condensation drips down the windows into the pot plants.

A thought comes loose and starts to fray. The room becomes a greenhouse, teaming with giant vines. Neon, verdant. If he can just keep them alive then Maya will come back. The plants shed their leaves. A violent blossom storm whirls as tropical sweat slides down his oesophagus, something between chlorophyll and chloroform.

Mo’s voice. ‘Thanks for sharing.’

Alex’s drowsy mouth is filled with coffee steam and he doesn’t know if Mo’s talking to him or someone else.

Over in Departures, children press against the window. Each no taller than three feet, they perform indecipherable sign language. Alex lifts a hand and they scatter.

At home, he lines up the clocks and schedules a sonic disruption for every 45 minutes to avoid another close call. Because Alex is hiding something; he can’t allow himself to rest long enough to dream. It would be too much to see Maya in the folds of sleep and wake up to find her gone again.

Their experiments got silly soon after they started playing house, hopeless attempts to the feel things they couldn’t reach through sleep anymore.

It started with a round of Sleeping Lions. Demolishing a wheel of Brie with an Ambien chaser was Maya’s idea and resulted only in a tandem case of cheese sweats.

For her birthday, Alex carpeted the kitchen with their mattress and the sofa cushions. He ordered a banner off the internet: ‘Welcome to The Landing Pit.’

Alex had not anticipated the vigour with which she would hurl herself off the countertop. He watched her flying, flailing, falling. Neither of them expected her to bounce into the table.

At least she stopped flapping her arms so they could break her fall.

Maya hated wearing the sling. She had to delay a work trip for a month and the soreness made sleep even harder.

Alex attached a mobile to the bedroom ceiling. Half a joke, half in the hope that it might hypnotise them both into slumber. It was briefly entertaining to fling socks up to hit it but Maya couldn’t get the leverage she needed with her left hand and before long the revolving planes, trains and automobiles grew nauseating.

As he scooped up the shower of socks then detached the mobile to put it in the trash, Alex recalled he’d rung Reception after that first night to ask if they’d found Maya’s balloon.

‘Housekeeping throw out any rubbish left in the rooms.’

The clocks and Awake Anon help for a while. Secondhand dreaming isn’t the same but it doesn’t hurt as much as the real stuff.

When being wrenched from sleep by the alarms every 45 minutes becomes too much, Alex takes to night-walking. He wears Maya’s sling outside and doesn’t know why. Sympathy, maybe.

Somewhere between 3am and 5am one night, a woman wobbles towards him, toes tipping over the front of her sandals.

Alex offers to call her a cab. She jabs him with her keys and runs.

‘Besides, have you seen the state of yourself lately?’ asks his brother.

After that, Alex spends his nights using up heartbeats and watching the past play over and over.

Sometimes he slows it down so he can watch his mistakes. The comments he made when she went out, the way he couldn’t be happy for her when she started napping more and needing Awake Anon less, all the times he woke her only to say nothing because he needed more love but didn’t know how to ask for it.

Maya said he snored, that he slept like a tornado and his night-sweats smelled like glue. His brother said she was straying.

He knew his brother was right but still his legs failed and vomit splashed out of him when she left.

Something caught in an engine brings a stranded pilot to Awake Anon, her body clock in need of repair from zig-zagging across time zones and Mo’s choice of location finally vindicated. Alex watches a hi-vis team work on the plane outside. What flying thing could have grounded such a beast: a bird, a lost balloon?

‘If cars and trains can’t get you to sleep anymore, you need a bigger engine,’ the pilot says. ‘I’ll take you up as soon as we’re cleared.’

The night that Maya returned from the postponed work trip, Alex had tied a balloon to the bedpost, making them both sad.

‘It was a bit much the first time,’ Maya said.

‘The balloon on the back of the chair?’

‘I hate them. They always burst. And you didn’t get my dream but Mo told me to give you a chance.’

That night, she wore old knickers and a band T-shirt to bed. Alex ran his eyes down the tour dates on her back until she turned off the light. He wanted to reach through the thick dark but imagined her flinching.

He tried to touch her with words instead. ‘What would you do if you were paper?’

‘Hope nobody wrote on me. I’ve got my own story.’

‘What do you miss most?’

He didn’t ask, ‘More than flying?’, and in the morning she was gone.

Alex can’t see up into the cockpit as the mechanical bird rolls by the window.

He doesn’t regret his decision to stay behind but can’t miss this chance to say goodbye.

He waves and waves until a hand lands on his back.

She isn’t talking about the pilot.

Alex is finally tired enough to tell himself the truth, that he isn’t the thing Maya misses most. ‘She isn’t coming back.’

It still feels like hitting the ground but the landing is softer this time, like he might be able to bin the clocks and the sling, and sleep on things for a while.

Maybe they’ll bump into each other someday, some night. Maybe they’ll reminisce about a couple, wide awake but chasing and cheating, flying and falling, just as dreamers do.

We Missed Flying the Most is from The Dream Issue – Issue 21. Order your copy here

Lydia Ruffles is the author of The Taste of Blue Light (Hodder, 2017). Her second novel, Colour Me In (Hodder), is out on 9 August.