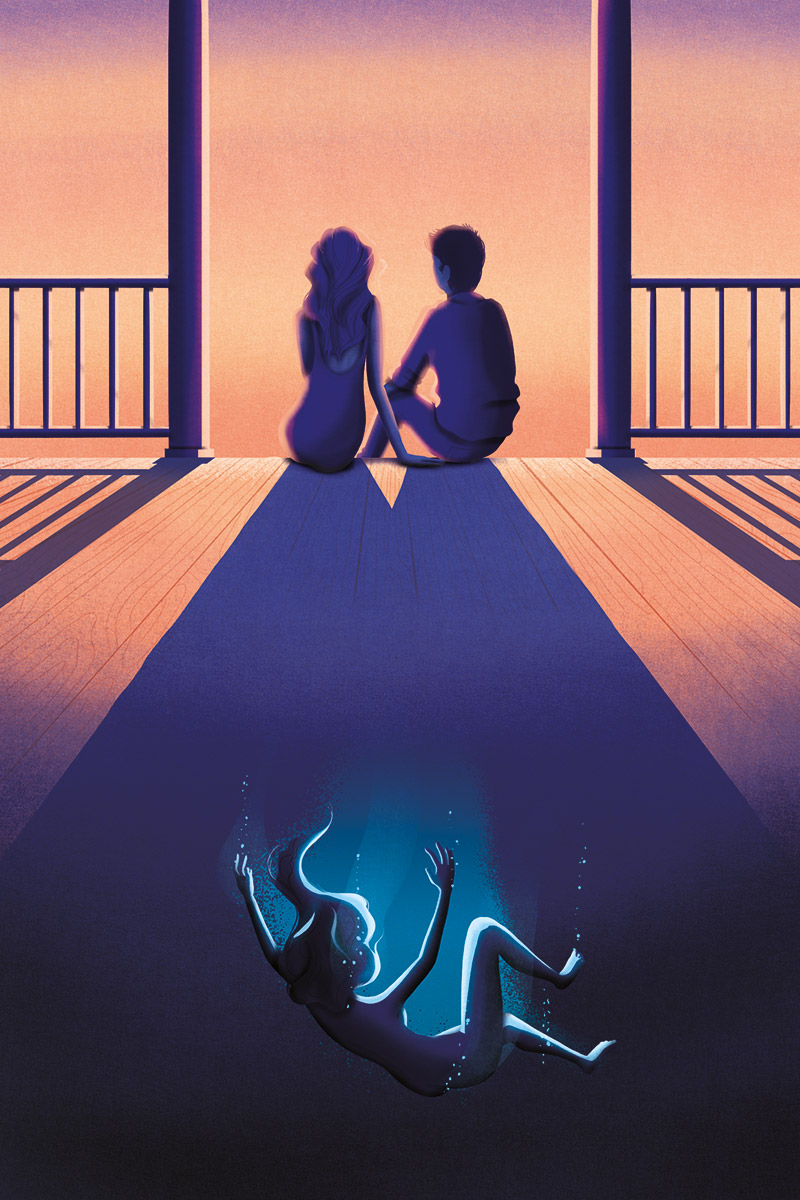 Whenever my sister mentioned his name it was always preceded by an ‘Ooh’. ‘Ooh Dylan,’ she would say at even my first reference to him, but we had survived a year together, and one apart, and I was hoping that this would now put an end to the ‘Oohs’.

We were reunited for the summer at Josie’s party. It had been a hard few months. All the false smiles at interviews and the mindless pleasantries had somehow been pulling at my essential being. A fragment of the poem I remembered from my A-level English class had been floating around in my subconscious of late and, in the mornings while brushing my teeth, the words ‘not waving but drowning’ would turn over and over. The poet’s name was Stevie–something. And I wondered if I had been given a name like Stevie might I have been a woman with just a little more spunk.

Dylan greeted me in the hallway and we held each other tight. I sniffed his neck and the familiar smell of his laundry and aftershave washed over me. ‘I’ve missed you,’ he said and I breathed in his words and felt his fingers search for mine.

There was predictability to the evening that was at once both perfect and sad. Each of us was only half trying to be likeable but mostly just being ourselves. Josie talked too much about herself, Alistair did something stupid that gave us all something to chat about, and Quinn was quiet. University hadn’t really changed us much as we might have wanted it to.

I found myself watching Quinn as I had many times before. She fascinated me. Her quietness drew people in. She was popular with the boys. And as the rest us had commented before, she wasn’t that pretty. She moved slowly and self-consciously, her long hair bouncing and her angular features catching the light. She left the room and sat on the step of the outside porch alone. It was a technique I’d seen her use before. Someone would always come to her. Tonight it was Dylan.

‘I’m just going to check Quinn’s OK,’ he said resting his drink next to mine. The sun set through the door frame while their silhouetted bodies stayed there all evening quietly chatting.

As I climbed into my childhood bed later that night, I rested my phone on top of me as I always did and waited for Dylan. It vibrated twice against my chest: ‘Goodnight’ and ‘Love You. xx’

We’d planned a trip to the zoo the next day. ‘The zoo?’, my dad said, but he didn’t understand that we were being ironic. Alistair was driving and he picked Quinn up first then me, then Dylan. All the way there I watched Dylan watch Quinn through all the pauses in the conversations through the wing mirror of the car.

We got drunk at the zoo and the day out turned into a night out and Alistair got fed up of driving us around and dropped us all in town. Quinn and I stumbled in the direction of our homes while the boys went for KFC. On my doorstep I asked her if she wanted to come in out of some sort of strange politeness.

My mum was awake and pretended not to notice our lack of balance and made us hot chocolates as though we hadn’t aged at all. As she busily wiped down the surfaces she filled in the gaps in with chat about a couple she knew, David and Lucy, who were getting divorced with a two-year-old child. I thought it was sad but my mum didn’t see it that way. ‘It was always coming,’ she said, ‘you see it all the time. She made him feel like she needed him. Relationships like that aren’t real. They don’t last.’

I thought of Dylan and all the nights in my bedroom waiting for his calls and of the way we’d celebrated our first year with shots of tequila in plastic cups when he collected me from the station.

Quinn and I said nothing. We just sat side by side at the kitchen counter sipping hot chocolate and clutching our mugs with both hands.

Later that week we all watched a film at Dylan’s and I watched him as he brought Quinn a drink and made sure he’d got the squash to water ratio exactly to her liking and watched her sip it. She said nothing all night, except at the end when Alistair asked her what she thought of the film and her answer was too eloquent to compare to mine.

When I said goodbye to Dylan, he ran his fingers deep into my hair when he pulled me in to kiss him. And I felt so tired. I fell asleep with my phone on my chest and my messages unread that night and I dreamt of Quinn and Dylan holding hands under a table.

It was the last party of the summer and it was loud and unsociable. I wore one of Dylan’s large jumpers and clawed at the sleeves like I wanted to get inside of it. Dylan and Quinn were deep in conversation and I wandered out to the fading sunlight and sat on the porch and hoped that Dylan would join me. With every second that passed I thought, Quinn would never have had to wait this long.

It was Quinn who eventually joined me. She could tell I was teetering on something because she carefully angled herself towards me.

‘What is your secret?’ I asked her. It sounded angrier out loud than it did in my head. I expected her to pretend that she hadn’t understood the question but she said nothing for a very long time.

‘I think maybe I just make them feel needed.’

There was a sadness in the silence that hung after it. The final moments of sunlight pierced through the trees on the suburban horizon. After a few minutes she got up tentatively, her long limbs brushing against mine. ‘People always say we’re very similar, you know.’

A month later Dylan and I broke up and just two days after I was told that he was seen with Quinn in the cafe on Greenway. I never tried to contact him again after that. I never found out what really happened with them, or whether she had anything to do with our break up and even as I sit on the lawn in the sunshine now watching my two kids play in the sprinklers, I’m not quite sure what Dylan and I would have been had there been no Quinn. Or had I had a name like Stevie.

Claire is from The Romance Issue – Issue 19. Order your copy here