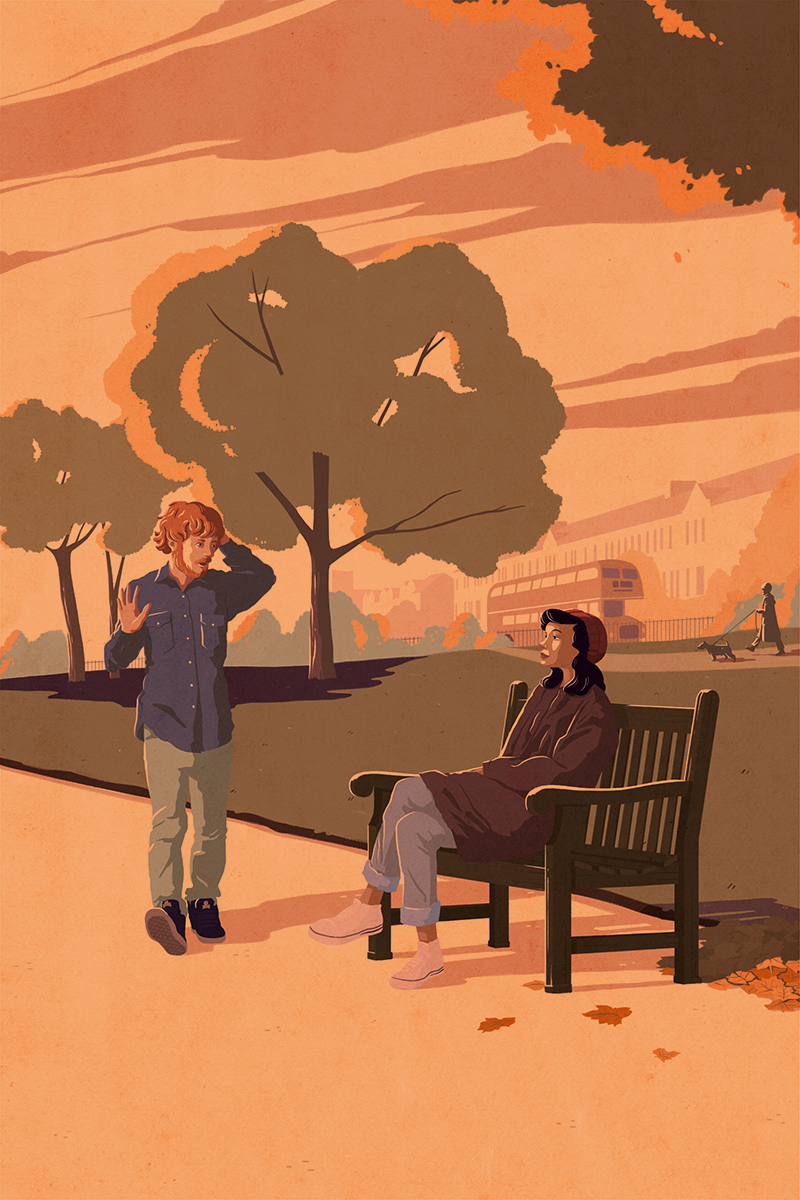 He saw her across the park. Like he did every day. And every day prior to this one, she’d ignored him. But today was going to be different. He’d been practising with his friend in the Turkish shop. The key pronunciation was putting the emphasis on the second syllable.

She approached. Her face hard, beautiful. The tracksuit soft, trashy. His heart racing. ‘Don’t blow it, Romeo!’ His mate’s laughter ringing round his head.

It’s now or never. ‘Günaydın,’ he said. She smiled. A big, beautiful, genuine smile. And walked past.

The door opened, ringing the small blue bell. Ali looked up, putting the worry beads down for a moment, a cheeky smile stretching across his face.

“Did you get the pronunciation right?”

Ali was full of pride, as if it was his own lad in front of him. A bit of a stretch – pale as a ghost, Ed Sheeran hair and skinny as a rake – but Ali liked to dream.

“Well I’ve had a couple of “good-nights-out’ with her since then.”

“Yep. So what next master?”

“There you go Ruth.”

Ali pushed the Turkish flag aside and handed over the fags with a wink.

Ali jumped off his throne, the creaky white stool getting some welcome relief – and swaggered to the front of the shop where he caressed an onion as if it were some precious stone, his large olive coloured hands making it seem more like a pebble than a ‘LARGE SPANISH’.

“These aren’t just any onions Romeo…these are balls of love that will bring tears of joy to both you and your Juliet.”

“Can’t I just take her to the chippy?”

“No! You want to blow her socks off right? And the rest?! It’s the finest gesture of love to make something with your own hands.”

“There you go Mick.”

Ali threw his young acolyte a head of garlic,

“You’ll need this and one of these,”

he slapped an aubergine into the lad’s hand. They both looked at the dark phallus on Romeo’s pale palm and giggled like school boys.

“Seriously though, salt it first, takes the bitterness out. Then pour in some chopped tomatoes and the finishing touch…”

Ali’s hand reached under the counter, patted around first touching the baseball bat – nope don’t need today – and found a small clear bag, normally the type that druggy Dave had his coke in, but this little bag was full of another intoxicating drug.

“And you’ll need something to wash it all down with.”

Romeo reached across Ali and grabbed the bottle of red, his shirt rose up just enough to reveal a pair of black bolt cutters in his back pocket.

Ali froze. Shit have I got this kid all wrong? He looked outside at the black moped and his mind started to race…the CCTV footage…the robberies…the battered girl…the £5000 reward.

“Pack of Rizzlas too, just in case your saffron doesn’t work.”

Romeo laughed as he left. “I love you Ali mate!’ Ali slumped onto the stool and stared vacantly at the onions. Who is Juliet and how do I warn her?

Romeo approached the park with a nervous spring in his step. He’d given this moment even more thought than all those days when he’d been trying to say hello to her. That seemed like a lifetime ago. And here he was about to meet her Dad for the final seal of approval.

He pushed the iron gate but it was locked, the damp residue of the rain wetting his hand. That’s odd. He checked the sign. ‘Opening hours: Nov to Feb 8am to dusk.’ It wasn’t quite dark. Whatever. He walked alongside the park, careful to miss the dog shit. Need to keep the new brogues clean.

The headlights from a passing bus lit a park bench, ‘their bench’ and he smiled. It was where they’d had that first chat. And kiss. They’d talked about the plaque. ‘For Margaret who loved it here,’ They thought about Margaret and both silently hoped they may have a plaque somewhere for themselves one day. Hope springs eternal in Clissold Park. Especially when you’re 17 yr old virgins from different sides of the tracks.

He checked his pocket again. No bolt cutters today, thank God. Just the home-made Turkish delight, thankfully still in one piece. He wasn’t sure whether Ali’s advice was right but he went with it. Hopefully it’d be another of Ali’s “clinchers”. He was jumped out of his Shakespearean dream by a loud beep. He turned and saw a black moped driving past. It was Matt. The twat. They gave each other the traditional middle finger greeting and went their separate ways. Romeo to hopefully a new life, Matt and his moped gang to more mayhem.

Esen beckoned him in. Her beaming smile lighting up the narrow hallway, hiding equal amounts of fear and anxiety. She was shitting herself, about to introduce the man she loved to the man she loved. ’Dad meet Arron, Arron meet Dad’ She’d practised all morning while getting ready. And now the moment had arrived. Her freshly varnished fingernails went in search of thumb skin to pick.

There had been others, but Arron was different. Maybe he wasn’t super hot, but in a way that was a relief. Pale skin, red hair, soft hands, every bit of him seemed not like all the other dickheads she’d dated. And he respected her, was patient and knew the lyrics to “Shape of You’. All of which qualified him to be the first invited into Dad’s home.

The front room was classic Victorian terrace. The dark leather three-piece suite dominating proceedings along with the flatscreen in the corner and family portrait above the fire. Arron shuffled in, slim-fit cardy and skinny jeans. He didn’t sit down in case this was against protocol and looked nervously at the figure bending down, tending the fireplace.

Esen walked across the rug and gently touched her Dad on the shoulder.

Her father stood up. The minute he rose the room seemed to shrink. He was the biggest piece of furniture in there. He rubbed his bald head and dark eyes to waken himself and prepared his trademark smile as he turned to welcome his guest.

Esen sensed something was wrong. Why had he paused? Why wasn’t he saying anything? The chuckle, the big outstretched hand, the offer of a seat. Nothing.

She turned to Arron and in his face too there was a look she’d never seen before. He’d gone white. It didn’t seem possible to be honest. He was nearly albino white as it was, but what little blood he had in his face seemed to have drained to his Converse. She heard her father utter something, his face etched with confusion and anger:

Not three feet away at the end of the sofa Arron murmured.

Esen in the middle, like a boxing referee, stared from one to the other and back again, dumbfounded.

“Do you guys know each other?”

Now or Never has been gradually updated with a new instalment. The first part is from The Romance Issue – Issue 19. Order your copy here