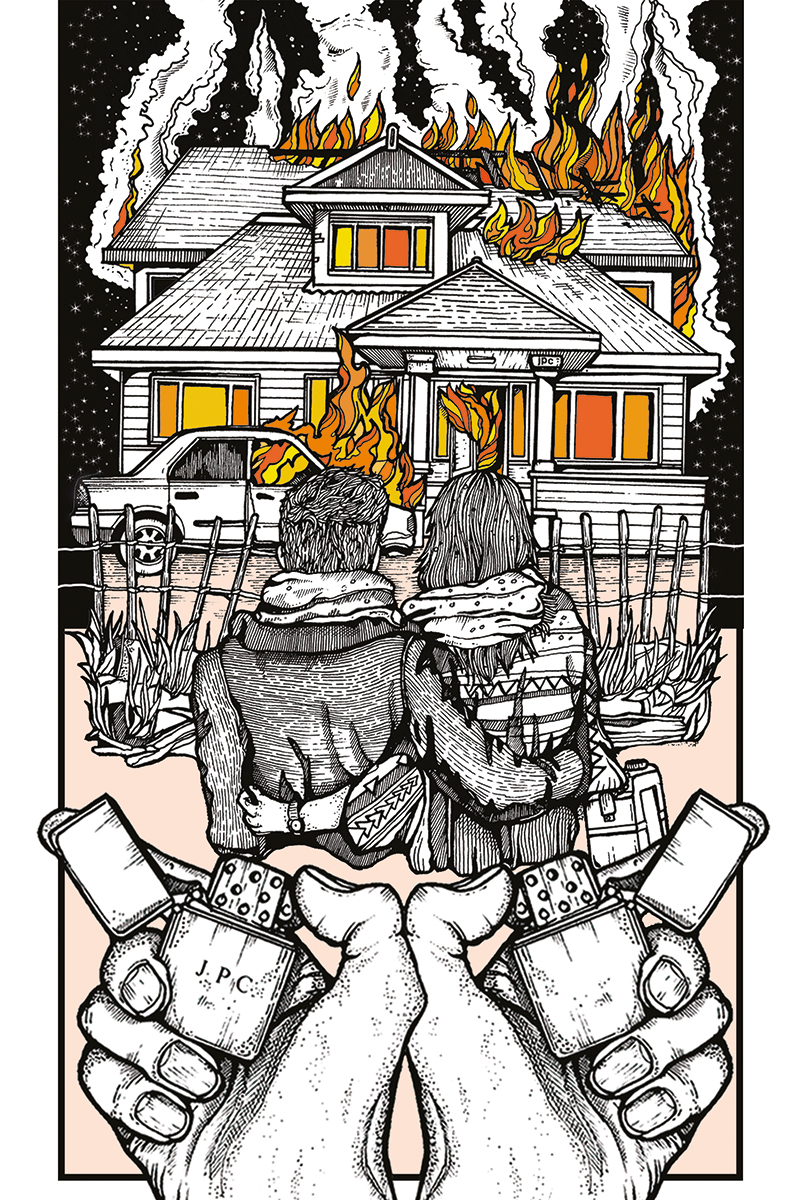 HOW TO CATCH FIRES

When I first met Carol she was burning a doll’s house and throwing little people into the fire.

I heard the smoke alarm and knocked on the door her apartment.

All I heard was: ‘All right, all right.’

Tendrils of smoke were curling under the door, so I tried to kick it down. I was in pretty poor shape, and it barely gave. In the end, she opened it anyway. There was ash in her hair. She looked like a bride who’d persisted despite the wedding catching fire.

Seeing me, she laughed. It was a conflicted sound – warm, but not untroubled.

I rushed past into the kitchen and found the doll’s house on a table, half alight. The roof had caved in and flames licked at it, like a loving pet.

‘I forgot about the alarm.’ She nodded up at the now-deactivated equipment.

I must have looked confused. She turned away, pushed a doll further into the fire, then walked over to an open window and stared out. I watched as smoke from the fire floated past her dreamily.

She watched as the small house was devoured. Her face became peaceful and beautiful. Long black hair was tied neatly behind her head, her skin was pale and flawless, not unlike a doll’s. She caught me staring, and smiled. ‘I’m all right.’

We got talking. I apologised about her door and told her I was an architect.

She shrugged off the door and laughed at the job.

Bluntly, she confessed that she was an arsonist. She burned down doll’s houses to get it out of her system.

‘Does it work?’ I didn’t really know what else to say.

She shook her head, then something gave and she started to cry. I reached out to her, and it turned into something of an embrace. I rubbed her back as she sobbed into me.

I couldn’t let her go, not after that. Tears can burn like anything else. Maybe worse.

We started to go out. Long walks that would end with her burning litter in dustbins. We would walk away from her res with ash pirouetting behind us. ‘Like confetti,’ she said once, startling me. It reminded me of that first fire we’d shared.

Not for the first time I wondered what she’d named those dolls. She hadn’t burnt any since I’d known her. A small breakthrough, I’d hoped.

I told her I’d build her a home to burn, and she said that she loved me.

That spark burned in us both.

For a year she kept a tight hold on the fire. Though I knew it was burning feverishly inside, she didn’t let it burn us.

Then, one summer break, we went to stay with my parents. I woke at midnight to find her dragging me out of a burning house. We lay on the lawn, overwhelmed while the house disintegrated before us.

‘They wouldn’t have understood,’ she muttered, weakly.

I shot her an enraged look, and she broke down. I shouted at her, I screamed. There might have been words, there might just have been sounds. She rocked, and all I could do was watch her.

An ambulance arrived and took us to a hospital. A policeman came who said he thought there might have been an accelerant used, but I played dumb.

They kept us in overnight. I watched over her, she never slept well. There were ashes in her hair, and I wondered: whose?

I asked her once if she could see a time when re wouldn’t call to her, and she’d smiled vacantly. ‘There’s no point to things that don’t burn.’

The words, though terrible, had a wistful truth when she spoke them.

We didn’t talk about that night. After the funerals, she sobbed in bed beside me, but we didn’t talk.

On our anniversary, I drove us to her dream house. I’d designed it to be perfect. I showed her around, then she decided to have a rest before dinner. I gave her a drink to help her sleep, and stroked her hair as she slipped away from me.

Once, I’d asked what the re meant to her. She’d said it was always leaving you, impossible to hold on to. I asked her if it was like a lover who never stayed. She’d nodded, but hadn’t trusted any words that might have told me more.

It was a beautiful house. I walked by the beach while it burned down behind me. With her, I’d always confused confetti and ashes. I said once I’d never leave her. She’d smiled sadly and said: ‘That’s how you catch a fire.’

How to Catch Fires is from The Romance Issue – Issue 19. Order your copy here