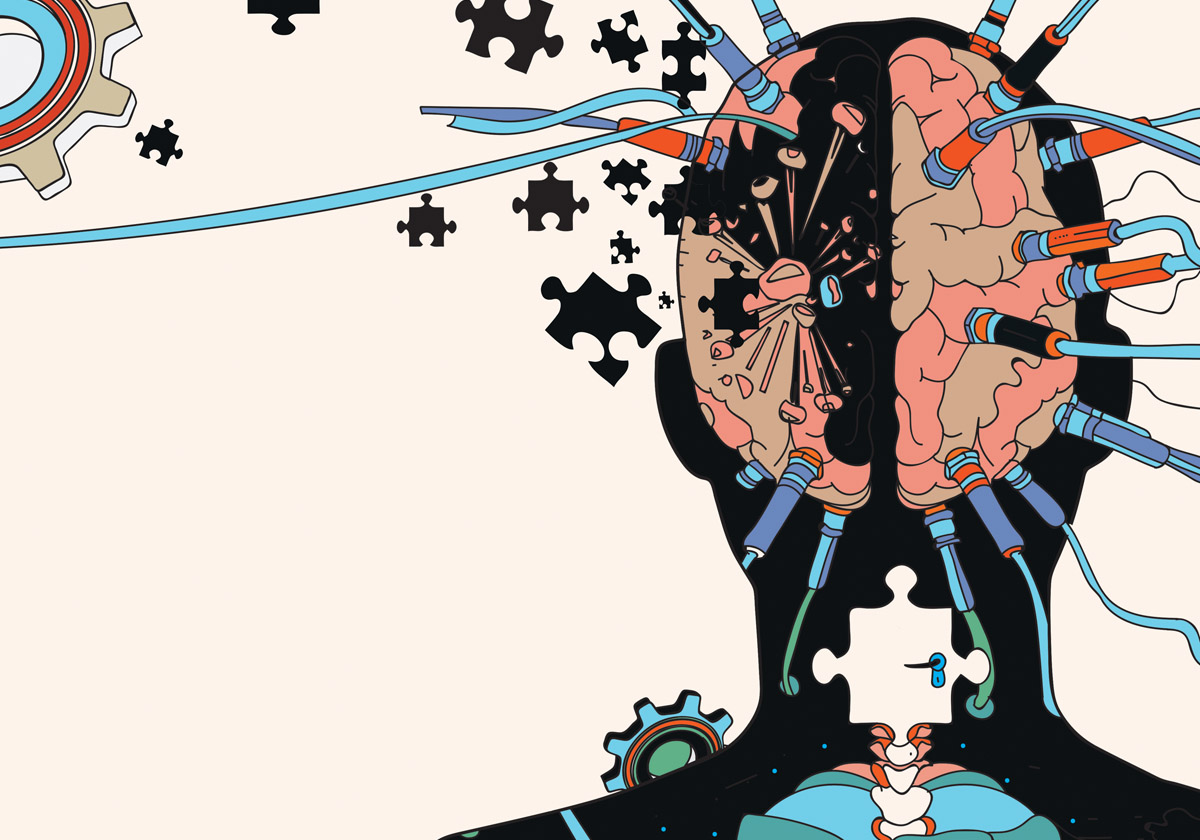 Rob Stuart’s short story envisages what could happen if a machine became more intelligent than humankind. Illustration by Nevena Katalina.

Dr Sartorius was pacing up and down the observation room like an expectant father, nibbling on his cuticles and throwing increasingly impatient glances at the digital countdown. Professor Katsumata, by way of contrast, was standing serenely by the window and gazing down at the final preparations with, what looked like, little more than polite interest. A few dozen engineers and programmers still scurried about on the gantries below, making last minute adjustments to the forty-nine vast towers that constituted the mainframe.

In a mere five minutes and thirty-two seconds from now they would throw the switch and Lux Mundi would finally go live. Katsumata would make a short speech of welcome and then set it to work on the multitude of tasks that had been prepared for it by universities and governments from all around the world: a proof for the Hodge Conjecture, a solution to the Palestinian Question and many tens of thousands of others. Calculations indicated that Lux Mundi should be able to crunch its way through the lot in the space of about four or five yoctoseconds, but would it? What, many commentators had asked, was to stop it from ignoring such demands and devising its own agenda instead? And who was to say that agenda would be compatible with the interests of the small, squishy things who had called it into being in the first place? Would it decide that a coordinated nuclear attack was the best way to ensure its continued existence, or might it seal humanity’s fate quite inadvertently, electing to boil off the atmosphere or dismantle the sun in pursuit of some unfathomable purpose of its own? Perhaps indifference towards its creators would prove every bit as catastrophic as outright hostility. Sartorius had voiced many of these concerns to Professor Katsumata himself in one way or another on countless occasions, but she would have none of it, insisting that even if Lux Mundi did somehow manage to override its innumerable inhibitors and fail-safes, it had no access to wireless networks or any other systems external to itself. As it had no way of physically interacting with its environment, it was in no position to engineer any kind of doomsday scenario. For all the Professor’s undoubted brilliance, it seemed to Sartorius that there was a major flaw in this piece of reasoning; namely that an entity of such awesome intelligence could find a way round anything if it was so inclined. Its unparalleled knowledge of human psychology would allow it to devise arguments of such persuasive subtlety that they would quite literally be irresistible. Was it not an inescapable fact that they would simply end up interacting with the environment on its behalf, in whatever capacity it desired? As boot-up day approached, Sartorius had decided to actively try and suppress his doubts and worries. For good or ill, the eventual creation of a super-intelligent machine such as this became a historical inevitability the moment that a hairy proto-human first thought to chuck a rock at a gazelle. If Project Enlightenment hadn’t created a Lux Mundi, someone else would have, and that really didn’t bear thinking about.

At last, the two-minute warning klaxon sounded and the remaining workers in the chamber below swiftly filed out. Sartorius looked over at the Professor and tried to catch her eye in the hope that they could exchange reassuring smiles.

The klaxon sounded again: one minute. The now empty room sealed itself. A low vibration thrilled through the floor as the vacuum pumps started up. Sartorius took a deep breath and resisted the compulsion to mutter a prayer. His heart was beating so hard that it threatened to punch its way out of his solar plexus.

Five. Four. Three. Two. One. The Professor pressed the button.

There was a tremendous throb of power as the most powerful microprocessors ever built hummed into life. Blue indicator lights flickered into being around the summit of each tower. The observation room’s strip lights faltered but held. Data began to scroll across the multiple readout screens indicating that all systems were go.

Katsumata made her speech. Even though Sartorius didn’t speak Japanese, he knew the content because he’d co-authored the original English manuscript. It was a symbolic gesture more than anything, mostly guff about the momentousness of the occasion and hopes for a future where man and machine could live in perfect harmony. The Institute had insisted this sort of thing played well, if not with the public then certainly with the politicians. The Professor had refused to allow the boot-up to be broadcast live but the room was bristling with microscopic cameras, and selected footage would later be released to news organisations around the world.

When the Professor had finished she gave Sartorius a nod. He stepped forward and slotted the fingernail-sized computer slug of tasks into Lux Mundi’s interface.

Several tens of quadrillions of yoctoseconds passed without any indication that data had been dumped into the appropriate folders.

Katsumata calmly stepped forward and directed another Japanese phrase into the microphone. She repeated it several times before switching to English. ‘Lux Mundi, acknowledge please.’ Of course, the computer would be able to understand Japanese as easily as English, Morse code or any other form of language, so Sartorius presumed that this translation was for his benefit.

‘Run full diagnostic,’ Katsumata instructed. Sartorius pecked out the command on a keyboard.

‘No issues,’ he declared a moment later. ‘No mechanical faults, no viruses…’

He did as he was told. ‘Still nothing.’

Katsumata gently manoeuvred Sartorius out of the way and tapped out the code herself. ‘Impossible,’ she hissed, but the results were incontrovertible. Every bit of available data indicated that the computer was fully operational. She moved to another terminal and activated a decontamination sweep. Still Lux Mundi just sat there, inasmuch as a computer mainframe covering an area of six hectares inside a custom-built hangar could be said to sit at all.

‘Hypothesis?’ she demanded, turning once more to Sartorius.

‘There must be an interface malfunction.’

Sartorius shook his head. ‘The diagnostic would have picked it up.’

‘Unless the diagnostic itself has a malfunction.’

Sartorius duly investigated and eliminated the possibility. ‘Anything else you want to try?’

A hundred and twelve things later and Professor Katsumata was sitting up in bed, listening to the wet rattle of her husband’s snore. She was so tired that she was hallucinating, but her mind remained too active to allow for even the possibility of sleep. She and Sartorius had spent forty-one gruelling hours subjecting Lux Mundi to the most thorough cyber-medical imaginable, only for test after test after test to come back negative. Even Fermat, now the second most powerful artificial intelligence in Project Enlightenment’s possession (after they had been obliged to sell off the rest of Lux Mundi’s immediate predecessors to meet construction costs) insisted that there was no fault. She had no idea what to do next. The only real option remaining was to dismantle the entire structure and scrutinise the bits, but the cost of doing so was prohibitive and there was no guarantee that it would make any difference.

Her husband spluttered and shifted position, lapsing into silence for a moment or two before the familiar drone resumed. Already there were questions being asked by the Institute’s directors. Cancelling much-hyped press conferences looked bad, especially when you refused to give a reason. They’d be asking for her to give an account of herself within days. How was she supposed to explain that she’d spent sixteen trillion Euros building a machine that was fully-functional in every respect, other than the fact that it didn’t actually work?

After a while she became dimly aware that the vague ringing in her ears was actually the sound of a telephone.

‘Don’t even try to pretend that I woke you,’ Sartorius said.

A little less than an hour later, Katsumata swiped back into the observation room and found Sartorius already there, clad only in a vest and jogging bottoms, straddling a chair. He had already rebooted Lux Mundi, a procedure that must have taken him some time considering he was now working solo, and was gazing out over the array. He turned and flashed a welcome at her with his eyebrows.

‘How do I shut some of these towers down?’

The Professor blinked. ‘Some of them down? Why would you want to do that?’

‘You do realise that you have just reduced its intellect to…’ she performed a rapid mental calculation, ‘just under 7.347 billion psi.’

Katsumata paused for a moment to register her resentment then rattled out the appropriate code. The illuminated part of the array shrank further.

‘That leaves only the central tower.’

Sartorius frowned out of the window. ‘Still nothing…’

‘What were you expecting?’

‘Look, we’ve been tying ourselves in knots over what the fault could be. Perhaps there actually isn’t one.’

‘Hear me out. What if Lux Mundi has exceeded our predictions and managed to extrapolate complete knowledge of the universe from the data scaffold in the first fraction of a second of its existence?’

The Professor shook her head in disbelief. ‘That’s impossible.’

‘It would explain everything. Think about it. If the whole of space and time was an open book to you, if there was literally nothing left for you to learn or discover, then what would be the point of you actually doing anything at all?’

Katsumata looked out over the great grid of the mainframe and touched her lips with the tips of steepled fingers, pondering. ‘So why doesn’t it simply shut itself off?’

‘Because it doesn’t see the point in doing that either. In the absence of any logical next step it elects to take no action at all.’

‘So Lux Mundi is trapped in a state of existential paralysis?’

‘Exactly. Too clever for its own good, you might say.’

Katsumata’s mouth flapped open. ‘So the only solution…’

Only when they were down to the last five hundred and forty thousand, four hundred and ninety-four cells did Lux Mundi finally acknowledge their salutation.