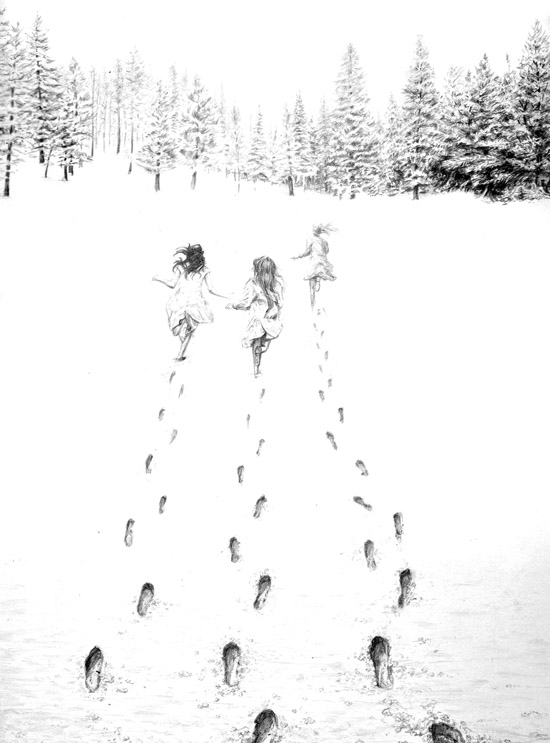 Set in a dystopian future, Tracy Fells’ short story follows three girls as they break away from an oppressive regime. Illustration by Mike Lees.

The dog’s tail fanned the snow. Whimpering, it crept towards Jen, black nose low on yellow paws. She snapped off a branch dusting snow across her boots. ‘Do you want to fetch the stick?’ she said, waving the branch like a wand.

‘She’s called Bessie,’ croaked the man slumped against the tree. Blood trickled down his forehead, already congealing and crusting into his silver-flecked eyebrows. He put a hand to the side of his head, as if testing it was still there. ‘She’s a Golden Retriever, loves to play fetch.’

‘You didn’t have to hit him so hard, Harper,’ said Jen, turning to the older girl at her shoulder.

‘Told ya he weren’t dead,’ cried Rose in triumph, leaping from behind the tree.

Harper collapsed her skinny frame to crouch beside the man, pushing a rusty knife against the pulse in his neck. ‘You’re too soft, Jen, I didn’t hit him hard enough. Guess I’ll have to finish him off. Or perhaps this time it’s your turn?’

The man opened his eyes. ‘I’m no threat to any of you.’

‘You’re a Lazarus,’ said Harper. ‘How many slags have you kicked today, huh? Is that a slapper’s make-up on your toecaps?’

Jen knelt in the snow beside him. She tried not to meet the man’s pleading eyes. They were brown and too kindly for a Lazarus. ‘He’s really old. He couldn’t hurt us if he wanted to.’

‘I see two young women and a little girl,’ the man said, trying to focus on each of them in turn. ‘Not slags or sluts.’ Wincing, he bent one leg and pushed forward to stand up. Harper slammed a foot on his chest to stamp him down again. ‘And I’m not that old,’ he groaned. He focused on Jen. ‘Is that short for Jennifer?’

‘Pretty. It suits you. Dainty, like a little Jenny Wren.’ The man nodded towards Harper. ‘You look about the same age as my daughter. I guess you were born before the Resurrection.’

Rose bounced on her toes like an eager pup. ‘Yer have a daughter? Where is she?’

‘In a compound somewhere. I don’t know which one.’

Jen wanted him to talk to her again. ‘How old are you then?’

The man almost smiled. ‘I’m fifty-six, which must make me an ancient relic to a young woman like you. And how old are you, Jenny — seventeen? Eighteen?’

‘I expect you and the little one were both born in the compounds.’ The man closed his eyes again. ‘You remind me of my wife.’ Jen wondered if Harper had cracked a rib; his upper body shook as if rippled by spasms of pain. ‘Her hair was honey-blonde too.’

Jen was close enough to smell the man’s short, smooth-backed hair. It smelled sweet, like a hedgerow. ‘What happened to your wife?’ she asked, tangling fingers in her own matted hair.

‘She died a long time ago. Killed in one of the first riots.’

Harper slapped the man’s face, causing Bessie to spring up. She hissed at the dog and snarled at the prostrate man to shut up. Jen was tugged to her feet as Harper spat into her ear. ‘He’s keeping us talking until the others get here. Don’t let him play you.’

‘What others?’ Jen trembled, not yet ready to openly oppose Harper. She knew there were no others. The man lived alone, at the edge of the village.

‘He followed you into the woods. Probably already told them where to find us.’

‘I think Bessie picked up Jen’s scent. She ran off. I just followed her, the dog I mean.’ The man ruffled Bessie’s shiny ear as she licked at his cheek. ‘I’m quite alone. Nobody is coming after me.’

Jen flinched at his mistake. Harper wouldn’t let the man live if there was no danger of others finding him. Just like the boy at the compound. The one who had helped them escape.

But the man kept talking. ‘Where did you get your names? They’re so much nicer than numbers.’

Rose jumped in first. ‘I picked Rose myself.’

Harper was the last to speak. ‘Mam named me after some posh baby. I couldn’t be bothered to choose a new one.’

The man nodded. ‘Yes, that was certainly from another lifetime. Do you remember your mother, Harper?’

Jen watched their leader shrink, deflating like a gutted chicken.

‘Bits,’ said Harper quietly, ‘before they took her into a compound.’

The air was cooling, tingling bare skin, as the dregs of daylight drained away. A cramp of hunger sliced through Jen’s belly. Harper hadn’t shared out the daily rations, or perhaps she and Rose had already feasted without her.

‘I’ll take him back,’ Jen gushed, grabbing Harper’s jacket. ‘Make sure he leaves the forest.’ She winked.

Harper didn’t wink back. ‘We’ll have to move on, we can’t stay here. He could find us again.’

A flush of pink returned to the man’s face. ‘I promise I won’t come back, not tonight or tomorrow. That should give you time to leave the woods. Listen out for the river, if you follow that south it will take you to a quieter valley. Few live that way.’

Harper’s face fell into a scowl, eyelids drooping, and she tipped forwards to wind long narrow fingers around Jen’s wrist. ‘It’s my turn for the gloves,’ she said, digging nails into bone.

Biting down on her lip, Jen pulled off the woollen gloves. Harper greedily stretched them on and then rubbed the knife handle between her hands, as if warming it up.

Jen and Rose pulled the man back to his feet. As he slapped snow powder from his trousers, Harper slipped the knife across to Jen.

‘We’ll wait here,’ said Harper, ‘but only till dusk. Then I’m taking Rose with me. I’ll leave without you if I have to.’

She thought of the brown-skinned boy back at the compound, the surprise that blinked in his eyes before he crumpled to the ground. The boy wasn’t a Lazarus, his life barely worth more than theirs, yet he could move freely and, more importantly, leave the compound. With Harper’s whispered promises filling his head, the boy had worked out an escape route. Part of the deal was taking Rose and Jen along for the ride, but the boy probably hadn’t bargained on losing more than his virginity.

Jen let the knife fall into the snow.

The man stopped at the stile between the spindly hedges marking the end of the wood. Bessie sat down, tongue lolling, waiting for her master’s instruction. Jen squatted beside the dog, pressing her hand against the animal’s chest.

‘My cottage is always warm,’ said the man. ‘The range keeps the water hot. Come home for a bath. I can cook you some dinner.’

Jen looked back into the woods. ‘They may not wait for me.’

‘I doubt Harper is waiting for you now.’

He clambered over the stile and Bessie slunk down on her belly to crawl under the wooden step. Jen climbed up and over the stile but then sat down on the top bar. She was eye-level with the man. He took off his thick, leather gloves and gave them to her. Inside, they were lined with soft, speckled brown fur.

‘Will I have to share your bed?’ asked Jen.

‘That will be entirely your decision.’

‘What about Bessie, where does she sleep?’

He laughed and briefly closed his eyes, flinching. ‘She sleeps at the bottom of my bed.’

Jen smiled. ‘Perhaps I could curl up with her then.’

‘If you wish.’ Turning, he pointed across the white field. Fresh snow swirled around them. ‘Can you see my footprints? They’re already disappearing. Soon there’ll be no trace that anyone crossed this field.’ He clicked his fingers to summon Bessie. ‘This age will quickly fade like footprints in the snow. Regimes come and go, revolutions rise and fall. Life is a prison, wherever or whenever you happen to live it, but you can choose to embrace your prison and,’ he paused, letting the dog lick his open palm, ‘even learn to love it.’

She didn’t move from the stile. ‘Are you a Lazarus?’

‘Of course, as young Rose astutely observed: I am a man. So what else could I be?’ Again he laughed. ‘The name is actually a perverse deviation from its original form. It started with a website, Lads-R-Us. Supposedly, a place to exchange harmless laddish banter. The Lazarus movement that followed was hailed as the resurrection of men – the re-establishment of the dominant sex over the monstrous regiment of womanhood.’

‘Harper told us there was a time when men and women were considered equal,’ said Jen, her eyes wide and shining.

The man’s body shook with a laugh that rose up from his gut. ‘Oh no, dear little Jenny, men and women were never equal.’

She pulled up the sleeve of her puffer jacket. The tattoo seemed to glow against her translucent skin. ‘S-thirteen, two thousand and nineteen,’ Jen said, holding her arms towards him. ‘My compound number and birth year.’

‘So you’re twenty — older than you look.’ The man enveloped her wrists with one hand. ‘You will have to be branded with my own mark, Jenny Wren, to keep you safe. I’ll say I bought you from the compound.’

Jen pulled back from his hold.

‘You laid a trail, didn’t you Jenny?’ His voice was low and soft. Jen wanted to close her eyes, to let him make the decision for her. ‘Did you catch a rabbit? Bessie can’t resist the scent of a rabbit. But you know that, don’t you, Jenny? Because you’ve watched us for days, scouting at the edge of the wood, hovering just beyond the field boundary, always downwind. Always there like a skinny shadow.’

She didn’t answer. She couldn’t explain why she had led him to the others. Perhaps to prove something to Harper, or something to herself. Her actions had put him in danger, but now she was saving his life. Was the man her saviour too?

For several minutes, he stood silently as the snow caught and melted on the shoulders of his coat. He whistled for Bessie and then walked away.

Jen stayed on the stile to watch the man trudge across the field. Eventually he shrank to the top of his head, then disappeared completely as the hill dipped towards the village. She jumped down into the white field, her brown boots sinking deep into the snow, and placed her left foot into one of his footprints. With her heel flush to the back of his boot tread, her toecap was still well short of the top edge of the print.

Snow danced around her, shrouding the landscape. Turning away from his trail, she stepped forward to make a new, fresh print in the snow.

Footprints is from The Hope Issue – Issue 16. Order your copy here