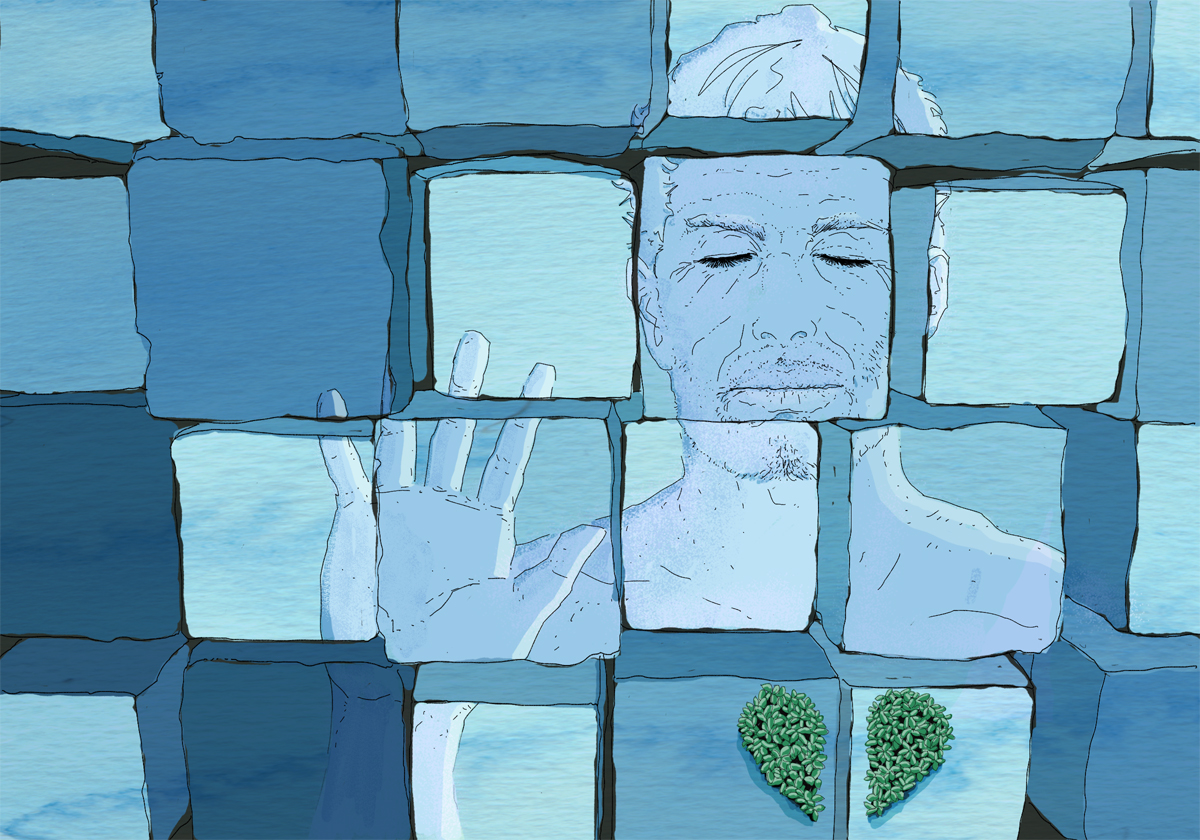 A short story by Jack Wells, providing a pertinent metaphor for parents who have had to give their children up for adoption. Illustration by Fabio Delvo.

The melting man splashed into the sleeping cul-de-sac. He walked jerkily, the walk of a man who’d lived life in a hurry. Not a healthy man, but one who’d often had places to be, and more importantly, places not to be. A man who had often found himself on the wrong side of that line. Tonight he carried a shovel on his shoulder.

Already, his voice had left him. That was the first thing to go. He had felt it leave, trickling down his oesophagus, past colon and kidney and inner leg, and then seeping into the ground. He checked his watch. It was 3 a.m. and three days after the snowfall. Around him, ice was beginning to yield to slush, still piled high on the grassy banks of the suburbs but crystallising, crumbled and speckled with grit. The wrong day to build an igloo, he thought to himself bitterly. But then again, it was the only day he had.

Stopping to catch his breath, he took a crumpled piece of paper from his tracksuit pocket. He looked at a house with a big red door and nodded to himself, putting the paper away again. His daughter’s new bedroom window stood closed and cold in the starless night. This doesn’t count as contact, he told himself, for the umpteenth time that day. He scraped his shovel along the pavement, listening for a moment. The street echoed, indifferent. He wiped a trickle of fluid from his nose. It trickled all the faster.

The melting man wondered if she had grown since he last saw her, what she would remember of his face. He searched the back of the curtains for a clue. He sniffed and shook his head — there wasn’t time, and anyway, it didn’t matter now. His face could barely remember itself. So he set to work, bending over his shovel again, collecting what was left of the snow into one big pile, rushing from driveway to driveway, collecting and dumping, collecting and dumping. Droplets were condensing on his ribcage, rolling down to where his too-big trousers flapped around his waist. His arms were becoming wetter and wetter, too. He willed himself to stay cold for a little longer.

He’d had six months inside to plan this: an igloo with a perfect dome. A door just big enough for a five-year-old to crawl through. On the outside, it must be pristine: not a fleck of soil. On the inside, it should be like a secret. Somewhere to sit and be safe. Somewhere to remember another day, in another life, when she had seen snow for the very first time; how it turned the world to white, how it left nothing untouched. It had been like a day off from everything; a break from the bailiff’s letters, from the arguments, the pounding in his head, all of it. He had built her a perfect igloo in the gardens and they had huddled in it together. It was a new start for all of them, as if the whole world had been touched with magic overnight. As if it would always be like this. Lola had cried when it melted.

All of his memories of his daughter were in the winter. For some reason, he’d always managed to get himself kept indoors every summer. That was due to certain patterns of behaviour that he had found himself trying to explain in many offices since. It had been that way for as long as he could remember. So he looked over the pictures that he did have, summoned from the depths of his sloshing brain. Of early mornings on frosty days, when the flat was filled with silver light. Of the days she would wake him up, standing on his bed, shaking him out of his fug to play. There were moments he wished he could apologise for. Moments he wished he could repeat. He took them all together in his hands and made bricks of snow. As the walls of his igloo became bigger, he felt himself becoming smaller, shedding layers with every handful that he patted down. He felt his elbows and kneecaps loosening, separating themselves from his body, pouring themselves down his shins and arms.

The melting had started two months ago, in the painted breeze block walls of the visitors’ room, with its blue plastic chairs and hushed conversations. Opposite him, a lady with a name badge and dangling earrings. ‘I know this is hard for you to hear,’ she had said, lipstick framing sharp white teeth. ‘But it has been agreed, with the social services and the courts, that the best future for Lola is one that doesn’t involve you.’

He remembered the piece of paper, her edging it across the table like a cyanide pill. Permanency. Stability. Neglect. Circumstances. Safety. Solutions. No Contact. No Contact. No Contact. The room had started swimming, then, and he found himself standing, trying to shout, but just gaping, gasping, gargling. ‘I don’t doubt that you love her,’ the lady had said. ‘I’m sure you do. Very much.’ Later, back in his cell, he discovered a trickle of water coming from his ear, that poured into his jumper for an hour straight without slowing.

It was all so gradual, that was the thing. It was just supposed to be her going to his parents for a weekend, just while he was away and her mum got her head together. It had been a difficult time, everyone could do with a break, that’s all, that’s what they told him. And then a weekend turned to a week, and a month, and all the while, things going downwards, him hearing stories of drinking, of tempers being lost too easily, and then Lola found herself in a new family. A nice family, the lady with the earrings had explained to him.

Well, these are the houses where the future is kept, he supposed, looking around him. He would have got angry about this, once, but not now. He’d thawed out, mellowed. He had loved her, but he understood that it wasn’t enough. She had been a part of him that broke away with the changing of the seasons. He felt his skin and muscle and sinew giving way to the water now, becoming an icy skeleton, translucent, spectral.

He patted down the top of the igloo. The last gift he would ever give her. Onwards, he thought. As the last traces of his body seeped into the ground, she slept safe. That was enough.

When Lola woke up the next morning, she felt as though the world was a blank sheet of paper. The events of the last five days had taught her to expect magical things to happen in the night.

Today was going to be another good day. Perhaps Thomas and Emily would take her sledging again, or maybe they would make snow angels and come back home for hot chocolate by the stove. She jumped out of the bed, dancing on tiptoes to the window, wiping away the mist to greet the breaking light.

Outside, the world was warming up; remembering itself. Pavements emerged through grey mush. Flower beds and electrical boxes and double yellow lines were all waking up and shaking off their ice. Her lower lip curled.

But then she saw it; there, in the front garden below her window, a brand new miracle. Rising in a dome from the snow, like a clouded crystal ball, stood an igloo on the lawn. All around it were the footprints of a stranger. Each one exploding with shoots of new grass.