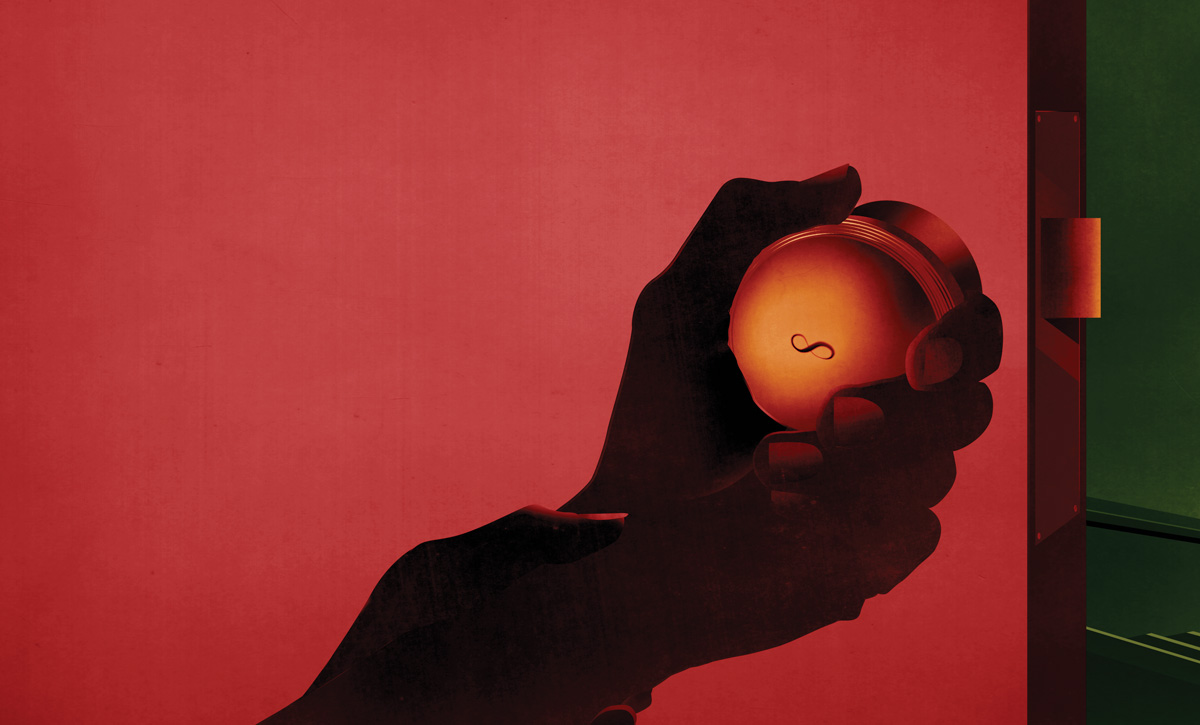 After our parents’ funeral, after the wake, after the last mourners had said goodbye — leaving only biscuit crumbs and wrinkled tissues behind — after all that, came the most terrifying moment of my life.

The waning winter light only half-filled the little living room of our terrace house. Dina and I sat on the couch pushed under the window and did not say a word. Our legs hung still; we were too short to reach the ground, too solemn to wriggle or squirm. I felt for Dina’s hand and squeezed it bravely, but my heart was thudding an uneven rhythm: they have forgotten us. They have forgotten us.

A creak on the stairs leading down from the second storey made us look. There, halfway up and halfway down, stood our aunts.

‘Oh!’ said Aunt Geraldine, as though she had forgotten us. Her cheeks were wet and shiny.

‘Oh,’ said Aunt Margaret, her face white and her mouth a round, pink O. Geraldine bent and whispered something in Margaret’s ear, then pushed on down the stairs past her. Aunt Margaret followed.

‘You precious, precious things,’ Geraldine said, coming towards us with her arms outstretched. She enveloped me in them, and from within her embrace, I saw Aunt Margaret stoop and whisper to Dina, ‘Come here, darling. We know just how you feel.’

And there, suffocating in Geraldine’s warm and soft bosom, I felt safe for the first time since the accident.

Is it strange that my sister and I have no memory of our aunts prior to that day? We never really thought so. There were far more inexplicable things about our childhood — things like God deciding to take both our parents at once, like why anyone would ever willingly eat tinned sardines, and whether there is any actual purpose for long division. Our aunts being there for us at precisely the right time was not an unfinished equation. It was the solution.

We grieved for our parents, certainly. There were many nights I lay awake in bed, shivering because my pillow was wet with tears grown cold. Dina got a bloody nose because a stupid boy made an insensitive remark about how heaven isn’t real and therefore our parents ‘are actually nowhere’. She gave him a black eye before he punched her in the nose, so it was worth it.

But the aunts did their very best to make life’s cruel transition as seamless as possible for us. They never spoke about moving us away or trying something new. Whatever their lives had been before, they dismantled them and shifted them here until Geraldine and Margaret became our whole world and we became theirs. They did not spoil us, exactly, but it was certainly no dictatorship.

Perhaps that’s why it was so surprising when the aunts laid down just one firm rule.

‘We do not want you to go down to the basement,’ Aunt Geraldine said, her broad brown hands on her hips.

‘Not at all,’ added Aunt Margaret.

The aunts did not answer.

At first that was enough. A horrible teacher had once told me the story of Bluebeard, and I had told it to Dina, and we both had nightmares for weeks afterwards. So we stayed away from doors that were locked and basements that were verboten. But after a time, even the image of dead wives strung along a wall was not enough to stem our curiosity. The basement had never before provoked any interest in us but because we were forbidden from entering this room of apparent secrecy, it now held the allure of Atlantis.

Dina and I peppered the aunts with questions.

‘Why can’t we go down into the basement?’ I asked.

‘But why is it unstable?’ Dina insisted.

Aunt Margaret sighed. ‘It’s not so much that it’s unstable,’ she said in her sweet, soft voice. ‘It just isn’t the right time.’ She opened her mouth as if to say more, but Aunt Geraldine rushed to interrupt.

‘That’s all you need to know for now,’ she said. And that was the end of it for that day.

Perhaps it was because they were also two sisters near in age that they understood us so well as we grew up. They were earthy, slightly overweight guardian angels and, though I hated myself for it, I sometimes wondered if we were not better off living with them than we would have been with our parents. The aunts knew what to say and how to comfort us, whether we were missing our parents or grieving because we no longer missed them, stewing about an exam, or arguing over the crimping iron. They were exactly what we needed.

One afternoon, roughly ten years after our parents’ deaths, Dina burst in, letting the front door slam behind her. We were both in high school; I was seventeen and Dina was sixteen.

Her face was blotchy and her eyes were red. ‘Andy has changed his mind about taking me to the Formal,’ she said, to no one in particular. Her voice rose to a wail. ‘He’s taking Alexandra Hemsworth instead!’

She threw herself full length on the couch and pressed her face into the cushions, her shoulders shuddering. Aunt Margaret put aside the tea towel she had in her hand and stepped over to perch on the remaining corner of the sofa. She pulled Dina into her lap, and began stroking her hair.

‘Shh,’ she crooned, ‘shh. Save your tears for better men.’

It was childish of me, but in the quietness that followed, I sensed an opportunity. Aunt Margaret was distracted by Dina’s need for consolation, and Aunt Geraldine, the basement’s fiercest guardian, was out of the house.

‘Aunt Margaret?’ I said, hovering near.

She looked up. ‘Yes, sweetie?’

‘Um, why can’t we go into the basement? I mean, really why.’

She blinked at me, her eyes still shiny with sympathy. ‘You need to trust us, you know,’ she said. Then she bit her lip and leaned forward, staring straight into my eyes. ‘This house is built on a fault line,’ she whispered. ‘If you go down there at the wrong time, something will break.’

A shiver prickled along my spine.

Aunt Margaret was eerily right when she told Dina that there would be other Andys. Dina went on to date an Andrew Taylor at university, and an Anderson West when she was junior editor at Payton Publishing. But she was wrong about the fault line. Over the next few years, I spent hours at the library searching public records. I contacted the local council, talked to surveyors, and even tracked down a seismologist. The consensus? There was no fault line of any kind anywhere near our house — or even our region.

Secretly, I began to wonder if there really was a row of dead wives hanging on the wall, or perhaps, in the case of the aunts, dead paramours. I dropped hints and asked wheedling questions over the years. Except for that one unguarded moment from Aunt Margaret, they would not say a word.

The aunts stayed with us for always, living large into a ripe old age and never marrying.

Eventually, even Dina and I stopped talking about ‘when’ we’d marry and started saying ‘if.’

Aunt Geraldine — always the feisty one — outlived Aunt Margaret by three years. In the dim evening following her funeral, after everyone had said goodbye and given their love, Dina and I sat side by side on the couch under the window and clutched at each other’s hands.

‘Except our feet touch the floor now.’

I laughed, a hiccupy, semi-hysterical giggle.

Dina sighed, and leaned back against the sofa cushion. ‘Do you remember when the aunts came down those stairs after the funeral?’ she said. ‘They looked like heroines of Greek myth, descending from on high to rescue us.’

Dina laughed. ‘Yeah.’ She paused. ‘So you thought they were old, even back then?’

‘Definitely,’ I said, ‘though they were probably only about our age now.’

‘That’s what I was thinking,’ Dina said softly. ‘How ignorant little children can be.’

She pulled her right hand from mine and brought it to sit with her left in her lap. She looked down at her fingers for a moment, and then back to me. Then she reached into her pocket and pulled something out.

‘I found this next to Aunt Geraldine’s bed,’ she said.

It was a crumpled scrap of paper, torn from a notebook. In Aunt Geraldine’s wild, loopy script was the phrase ‘It is time’.

I felt the old goosebumps at the base of my neck, and shook my head.

Dina shifted next to me. ‘You know we’re going to have to clean out that basement sometime,’ she said. Then she grinned a swift, let’s-take-this-bull-by-the-horns kind of grin. ‘I just think it’s the right time.’

We stopped at the door to the basement, and Dina looked at me fiercely for a second. The grin was gone and her eyes were wet with tears.

‘I kind of feel like I’m betraying the aunts,’ she whispered.

I smiled, but there was a hard ache in the back of my throat. ‘Those aunts and their crazy fault line.’

Dina shook herself. ‘Come on.’

She twisted the key, pushed open the door, and I moved through onto the first step, shadowy and dim. I fumbled at the wall for a light switch, but there wasn’t one.

‘All right, all right.’ I felt her behind me and took a tentative step down, then another. The fingers of my right hand trailed against the wall, still hoping for a light switch. Then I thought of dead lovers and twitched my hand away.

It got easier to see as we made our way further down. Perhaps there was a street-level skylight near the ceiling of the basement because the light began to reach up the stairs a little — soft, grey light.

Dina stumbled against me from behind and I jumped, the air leaving my lungs in a sharp hiss. Dina giggled, then quickly swallowed it away.

Two more steps, then one, and we were down the staircase enough to see the entire basement open out before us. It was shadowy and muzzy with late-afternoon light and there were no dead women — or men — hanging from bloodstained walls. Rather, there was a familiar wallpaper, familiar carpet, a familiar window looking out onto a familiar street — and two small girls sitting close together on a couch pushed under the window. They looked up at us, their faces white and their eyes huge and round.

Dina pressed her mouth close to my ear. ‘Meg,’ she breathed, ‘the fault line.’ She pushed past me and rushed down the remaining stairs to the children, her arms stretched forward to meet them. ‘You precious, precious things,’ she said, as she folded the tallest girl against her heart.

The loneliness and emptiness in their pale, round faces hit me with a jolt, as though the loss was my own. And I suppose it was.

The littlest girl still sat on the couch, staring. I bent towards her.