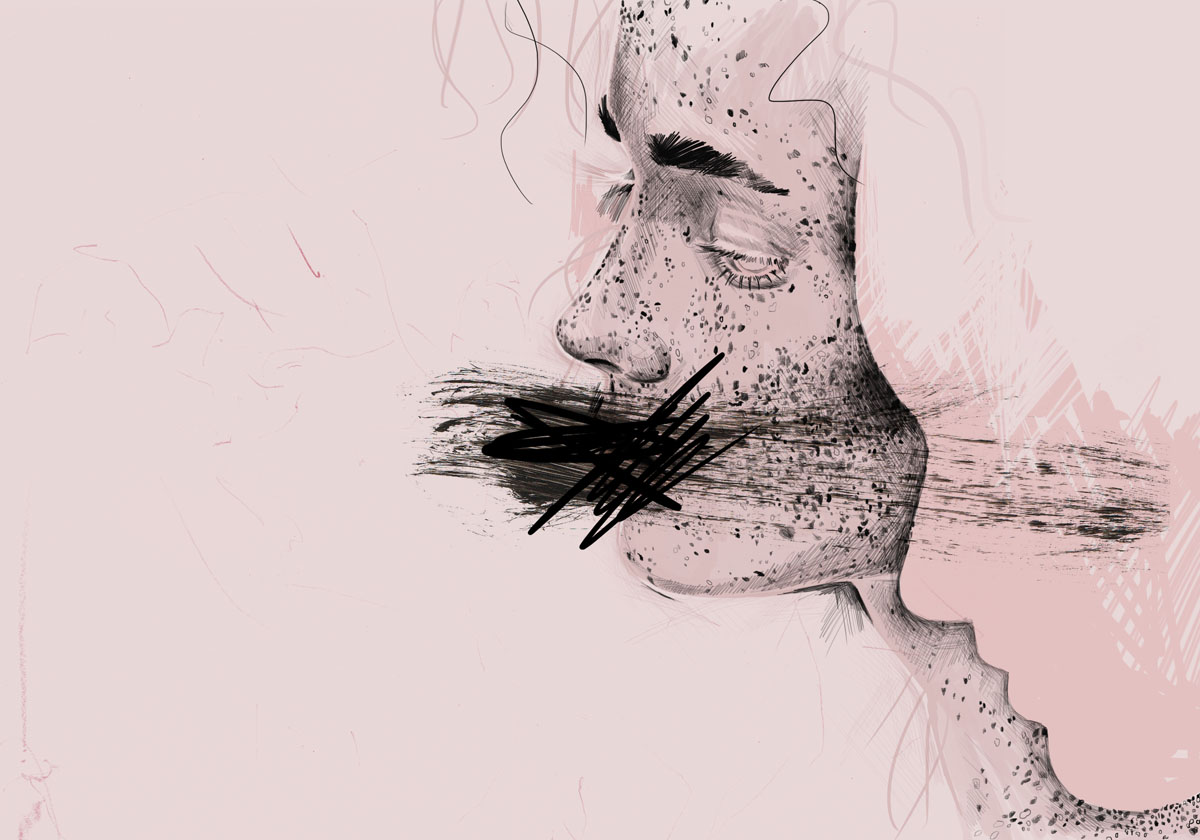 THE MARGINS OF SILENCE

A mother who can predict the future finds her gift to be more of a curse than a blessing in John Vicary’s short story. Illustration by Romina Birzer.

My mother could predict the future. She saw a series of interlocking possibilities like I might watch a movie; the images came to her, and she knew which path to take.

‘Is it going to rain today?’ I’d ask her when we were younger. ‘Can we go to the park?’

‘Watch TV,’ she would say. ‘The weatherman knows better than I do.’

Later, when we were older, I wanted to know about boys. ‘Does Nick like me? Will he ask me to the dance?’

She would only shrug and tell me to wait and find out for myself.

‘All in good time,’ was her only answer.

At a stoplight, she might pause an extra second, her eyes glassed over. ‘Did you get a vision?’ I’d ask. ‘Why are we going this way?’

She would shake her head and complete the turn, oblivious to the cars behind her. ‘I just forgot to turn off the coffeepot, that’s all.’

At the store, she might hesitate over the cantaloupes, her hand stilling then reaching for one in the far back. I imagined her mind’s eye warning her of internal rot or salmonella, but she just smiled and moved to the apples without comment.

‘You’re being silly,’ she would say. ‘I don’t know anything more than you do.’ But she never met my gaze when she said that.

On Lavender’s fifteenth birthday, she claimed to have inherited our mother’s gift. She began reading the cards that night. She carried a beat-up deck with her everywhere, even though it was missing the ace of swords and the four of pentacles.

‘How can you do a proper reading without all the cards?’ I asked.

She shuffled the cards through her fingers. ‘I can feel things. Like Mama does. Let me tell your future.’

‘No,’ Lavender said. ‘Let the cards speak for themselves.’ She laid three cards in front of me.

I frowned. ‘Aren’t I supposed to choose my own fortune?’

‘No.’ Lavender flipped over the battered rectangles. ‘Hm, this is a very interesting spread.’

I glanced at the cards. One was torn at the bottom, obscuring the label and leaving me to wonder at the meaning. ‘Is it good?’

‘The cards are neither good nor bad. They just tell you your fate.’ Lavender picked up the card on my left and waved it in the air. ‘This is the five of cups. It’s very significant.’

In the kitchen, our mother sighed.

‘It just is. Especially along with these other cards. I see… uh… changes. Yes, a lot of big changes in your life. Coming soon,’ Lavender said. ‘And definitely heartbreak. Yes. I see that clearly right here. The Lovers, inverted. It’s a bad omen.’

‘Don’t ask her! I’m the one with the gift,’ Lavender said.

Mother let the sound of her knife on the chopping board answer for her.

‘Well,’ I stared at the cards, which just looked like colourful pieces of paper to me. ‘What should I do, then?’

Lavender reshuffled the deck and dealt them anew. ‘Ah, it says here that you need to travel very far. I see a journey in your immediate future. Or maybe you shouldn’t travel. It’s hard to say. Either way, you’re bound to be disappointed. I’m sure of that.’

The rainy season came and went, and Lavender forgot about her gift when a boy from school started calling. I saw the lines around Mama’s mouth tighten.

‘What do you know about him?’ I asked her. ‘Do you see something bad for Lavender?’

‘Help me with this sheet,’ she said.

We worked together folding the linen, and I thought she’d keep quiet like she always did. But as the white expanse tucked in on itself, Mama spoke. ‘It’s better not to know some things. It’s better not to ask.’

She nodded once, the sheet clutched to her breast.

‘I wish I could,’ I said. I reached for a blanket in her basket.

I went, but it didn’t stop me from hating Mama when Lavender turned up pregnant the next summer.

‘You could have stopped this,’ I said. ‘You knew what was going to happen.’

Mama stroked Lavender’s hair as she cried. ‘You don’t need to have any gift to see what was coming. That’s true for most things.’

‘Then why didn’t you do something?’ I asked. ‘You’re our mother!’

Mama said nothing. I didn’t notice how tired she looked. I wouldn’t have cared. I left them that night and I didn’t come back.

The visions started when they handed me my own daughter. After hours of labour, I opened my arms to cradle the girl I’d pushed into the world with my own strength. Instead of love, I was flooded with an infinite variety of lifetimes that burst like fireworks behind my lashes. Each touch, every word, changed the kaleidoscope of prospects for her existence. I had been wrong; it was nothing like a movie. I could see my influence in her future and it terrified me.

As she grew, I would often pause as she made choices that changed the outcome of her future. Her path was rewritten in an instant, and I watched it spool in front of me.

I blinked. ‘Mm-hm,’ I said. I came to understand why my own mother had been so careful with her words. Every assent rewrote my daughter’s life. Every denial inked a new path. I learned to live in the margins of silence.

‘Should I wear my hair up or down? Which looks better?’

The paths branched off from each choice, snaking out into invisible infinity. I saw her growing up, growing old. Pain. Heartbreak. Even the simplest decision came with a price. When I knew the outcome, how could I possibly decide? I shrugged, and saw my mother in my silhouette. My daughter turned away from me. I wished, not for the first time, to view my own future instead of hers. I wonder if my mother had wished the same.

My own words echoed back at me from a different time, and I answered accordingly. ‘All in good time.’

‘The time is now,’ she countered.

I turned my back and went to the kitchen to start dinner. The sound of my knife upon the butcher’s block was the voice I didn’t have for her. It rang out in the stillness, chop chop chop, all the words I wanted to say but could not. I love you, it said. Don’t hate me. I forgive you if you do.

When I turned back, she was gone.

It is the rainy season again. Soon it will be summer.