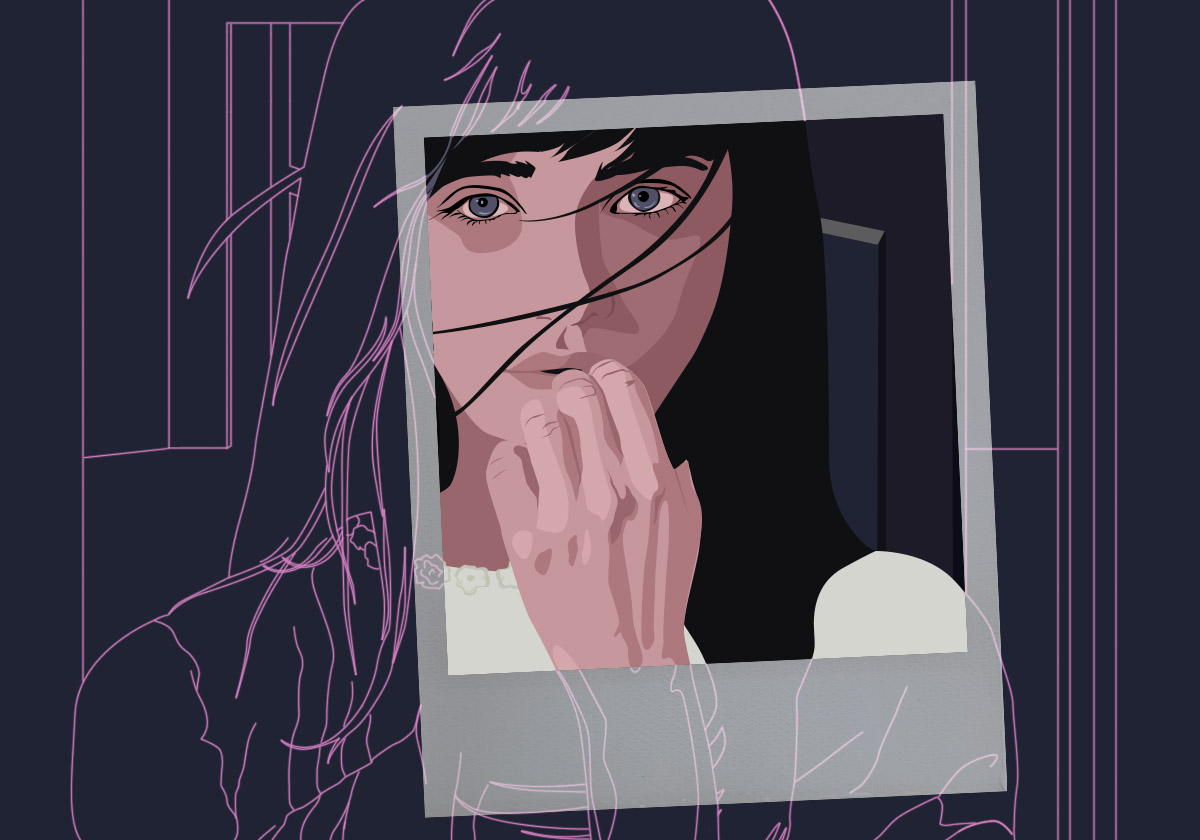 A woman uncovers a curious truth as she explores the house she’s been gifted by a perfect stranger. Short story by Christine Burns, illustration by Elina V.G.

At first glance, the house looked inconspicuous, but who knew what lay inside.

Maybe I should have waited for the daylight, but as the new custodian of the key, it was burning a hole in my pocket. Mr Bartlett had tried to find parting words befitting the situation but, being as bemused as me, my usually articulate solicitor had been tongue-tied.

My hand shook as I turned the key in the lock. Crossing the threshold was a terrifying prospect. Mr Bartlett had been unable to help me form any expectations, given he knew no more than I did. The dull legal terminology of the will hadn’t provided a portrait of the previous owner. The executor had been unwilling to meet or provide any explanation as to why Laurel House had been gifted to me.

The handle turned easily but I had to use my weight to inch the door open. In the dingy glow, I glimpsed the barricade. A stack of newspapers stood shoulder height. As I shoved the door, they formed a landslide and a time-bleached copy of Today slapped at my feet. The face of a long forgotten politician stared up at me. Curious, I thought, like Alice going down the rabbit hole.

I called out a ‘hello’. Looking back, I have no idea why. I’m not sure who I thought could be there. Mr Bartlett had done his research and, according to the records, my benefactor had no offspring or spouse.

I had to squeeze past the stacks of papers that lined the hallway. I dreaded to think how much stuff had been hoarded.

The first room on the right was the lounge. It was the strangest thing to walk into a room that looked as though it had been inhabited only a moment ago. A newspaper folded on the settee, a potted ivy on the windowsill, even an empty mug on the little table. Unlike the entrance to the house, this room was neat and tidy. Comfortably lived in.

Nobody had been here to tidy a life away. Mr Bartlett had asked me if I wanted the house cleared but of course, I didn’t. Rifling through personal possessions was the only means I had to learn about the man who had left his home to me, a perfect stranger.

Some people say momentous events have a dreamlike, hazy quality. Not for me, I can remember every little detail with absolute clarity. Like the dust motes dancing when I turned on a lamp. Like the faint smell of liquorice. Like the blanketed dog basket next to the settee, which made me feel so sad I had to leave the room.

Across the hall was the bathroom. The one room in a house that lets you peer into another’s psyche. Not immaculate, but far from disgusting, this space too contained the intimate detritus of life. A toothbrush, an old- fashioned razor and a badger hair brush. A pink towel dropped in the bath, left to languish.

I remember that a wave of panic came over me there. This was someone else’s territory, someone else’s life. What right did I have to wander around like a tourist in an exhibition. I had to splash cold water on my wrists to cool down and calm my pulse.

Everything around me fitted the profile Mr Bartlett had given to me. My benefactor had been an elderly man; eighty-two, to be precise, according to the death certificate. He’d written his last will and testament twelve months before he had died which showed him to be a meticulous man. He’d left astonishingly clear instructions for his funeral. He’d even paid for it in advance. This house was him. Apart from the errant towel, and the wall of newspapers, everything was in order. The neat line of toiletries. The careful white brushstrokes on the back of the glossy door. I had never known the owner of this house but, standing there, I pictured him as a kind, studious man, who liked his own company and routine.

The next room made my heart freeze. I had expected a bedroom, and maybe it was, but this room held no furniture to reveal its identity. But the walls were decorated. Decorated with hundreds upon hundreds of photographs that reached from the skirting board to the ceiling. My mind, fuelled by tabloid frenzy, went into overdrive. I am ashamed now to say that I thought the images would be of a perverse nature. Perhaps, in some ways, they were, but not in the ways I was thinking as the moment unfurled.

At first, I was too scared to look at them, and hovered in the doorway. But this was my house now, and I needed to know what had gone on here, if anything. I can still hear the creak of the bare floorboards as I tiptoed towards the gallery — a memory that is tattooed on my brain.

The first photo was blurred, but I could make out the view of a street; cars parked along the kerb and a stretch of green on the other side. The next image was clearer and of the same subject matter, an everyday scene of a residential street. Cars, houses, people, or rather, one person, who wore a mac that was just like mine. Who held a handbag, just like mine. In the neighbouring photo, the woman was closer to the camera. Her dress could be seen now, a quite unique cerise with white polka dots — just like the one I had bought from a vintage fayre. And those sunglasses, wayfarers, just like the pair my friend had bought for me. I scoured the photos around me, frantic and with bile rising in my throat. They were all of me, every single one. Me walking to work, me doing my weekly shop, me meeting my friend after work. Me, me, me, me, me.