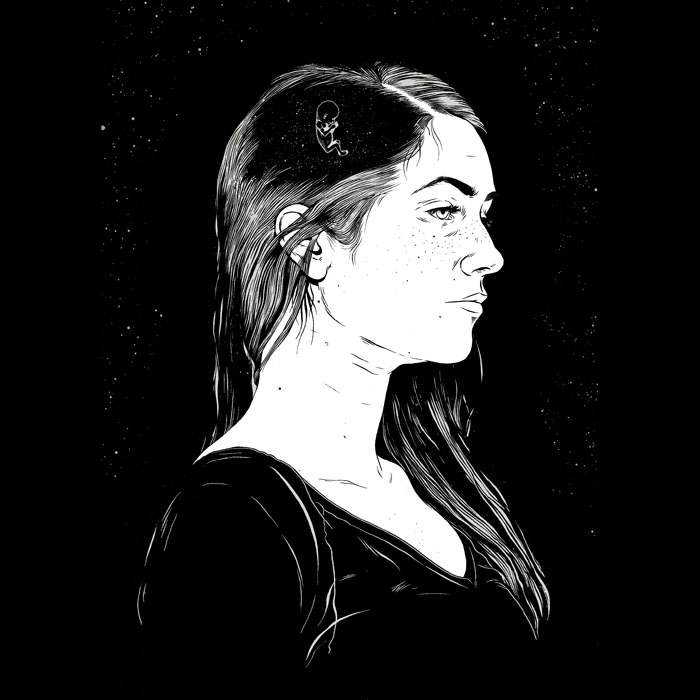 Roisín O’Donnell’s flash fiction piece explores the mystery, beauty and potential of an unborn child in the mother’s imagination. Illustration by Louise Pomeroy.

I used to imagine you as an astronaut. A rogue intergalactic agent who had escaped a despotic starship, and who was sheltering inside my belly like a dwarf planet, a tail-chasing comet, an unnamed nebula. It was some shock to find an astronaut hiding out inside me. I received your first coded astro-signal, a pink line on a white plastic stick. How will we manage? was my first thought, but I quickly realised that even NASA never had a secret astronaut like you. My little sputnik, from my mother ship I sang you songs of freedom, while for twelve weeks I navigated your rebellious cosmic arch.

Walking the city streets with an astronaut inside me, I dreamt up futures for you down to the colour of your hair. My North Star, my axis and my meridian, you wandered leaving finger-nail-sized footprints over my belly’s slowly expanding world. Breathing through umbilical tubes, you illicitly moon-walked my dark and unknown spaces. Down the pulsing lily slide of uterus to cervix. You set off bravely on a two-hundred-and-sixty-eight day trip. Your destination – life – uncharted territory into which you ventured. You jetted at light-speed towards a life that no one else had ever lived before.

Then on my bed sheet one morning, I found you’d left a sample of flowers from another planet. Nothing as violent as roses. Cherry blossom maybe or sweet pea crawling the summer terrace, waiting to bloom. In the Rotunda hospital, that soundless space on the monitor yawned inside my womb. The nurse stared at the black hole into which you’d floored us all by teleporting, without a trace. You’ll have another one soon, the nurse said, but she didn’t realise that rogue intergalactic zygotes are hard to find. As I sat on that high white bed, the nurse took my blood. I could have cut out my heart and handed it to her after you had left me sitting in the middle of a supernova. A silence that eclipsed my heartbeat like a new moon’s orb. Do you want a copy of the scan on disk? Sometimes it helps, the nurse said, but I shook my head, imagining you counting down to take off into the celestial heights.

I didn’t need a disk to remind me of your diverted space mission. In an aging, fading mint-green universe leaking light and gravity, our paths continue parallel through the chinks in space and time. In every waning and waxing phase of life, our two trails interlink like asteroids destined never to collide. I imagine you now as a satellite, trekking each night’s dark turnings, intercepting signals and beaming rebel poems from pole to pole. Smart and stubborn as Galileo, my little freedom-fighter, I see you aiming your silver skyrocket towards a full moon’s orbit of some undiscovered planet on a distant, troubled star.