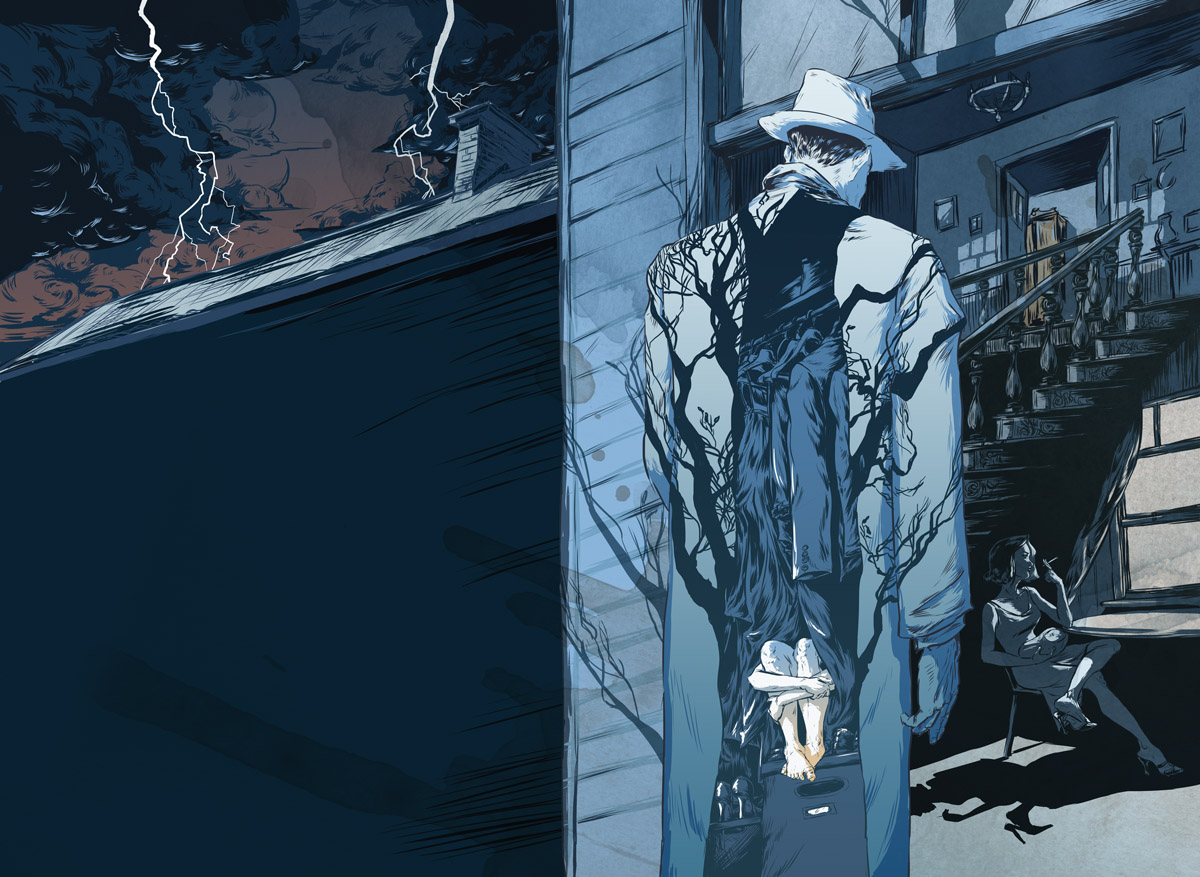 A child stumbles across a destructive secret that will change her life forever in Audra Kerr Brown’s compelling short story. Illustrated by Mitt Roshin.

I found my first secret during a thunderstorm in the back of my parents’ closet, curled up between the wooden file cabinet and the wall, its blackened eyes staring up at me, unblinking. I’d often hide during storms, cowering from the thunder and lightning variety as well as from the frequent screaming and shouting parental tempests that would swell to the rafters like a flash flood. Parting Mother’s housecoats, I’d tiptoe over shoes lined like hedgerows towards Father’s side of the closet, which seemed darker and deeper and therefore, safer. With flashlight in tow, I’d push past his suits, his woollen winter coat, his leather-armed high school letter jacket and wait, hunkered in a squat, until the rain stopped or the waves of anger calmed to a trickle of sporadic expletives.

While sitting out a ferocious spring storm, hugging my knees and savouring the smell of moth balls and cedar chips, I sensed I was not alone. Perhaps I heard a shallow heartbeat, or felt a flinty gaze, or maybe I picked up a weakened signal as if it were emitting a high-frequency pulse, drawing me close. But somehow, I knew something was back there in that sliver of space behind the file cabinet, living, breathing, and waiting to be found.

I aimed the dual beam of my flashlight along the baseboards, illuminating a sock, a rubber band, one of father’s silken ties, a dead fly, and then, with a great flash of lightning and accompanying thunder that shook the house and rattled the windows, I saw the secret. It curled defensively in the pale yellowed light like a dog bracing itself against the cold, its eyes trained on me, those darkened pin-prick eyes. How strange, I thought. How strange and yet, how astonishingly beautiful. (Only twice in my life have I experienced this odd mix of attraction and repulsion: that day in the closet, and on my wedding night, having set eyes for the first time on the naked, male form. On both occasions, attraction was the victor.)

Of course, at that time, I did not know it was a secret; I didn’t even know they existed. I’d learned childish rhymes to help identify and steer clear of possible threats such as poison ivy, leaflets three, let it be; coral snakes, red touching yellow kills a fellow; and black widow spiders, red hourglass, better run fast — all of which could cause bodily harm; but no one had ever warned me about the innocuous-looking creatures lurking in the back of closets and under beds, between mattresses, beneath floorboards, and inside toilet tanks. The kinds of things that can rip your world to shreds within the blink of an eye. I think of this often and with deep regret. If only I’d used my flashlight right then as a bludgeon to its ripened head; how very different my life might now be.

My fear of storms having been stolidly replaced with the exhilaration of discovery, I scooped the secret into my palm where it sat placid as a toad — and much heavier than I expected, quite like a lead paperweight. I couldn’t wait to show Mother what I’d found and as I headed down the stairs I took them with care, one at a time, as opposed to the usual sliding on my backside, the flashlight clenched between my teeth to navigate the way. Presumably, the lightning strike had knocked out the power and even though it was only late afternoon, the house was drenched in deep shadow.

I found Mother in the basement holding a candle to the fuse box. She balanced the baby on her slim hip and huffed loudly upon a cigarette which protruded from the center of her bright red mouth, her lips like a hibiscus flower, the cigarette poking through the petals as a phallic pistil.

‘Aren’t you the brave one?’ she asked, flipping a switch. The basement lights flickered back to life and the sounds of her favourite television game show showered down from the den: the audience laughter, the ticking clock, the raucous buzzers. ‘I didn’t expect to see you until after the storm,’ she said, with genuine surprise. She then snuffed out the candle and set it down. ‘What have you got there?’

To gain closer inspection, Mother shifted the baby — also known as The Doppelganger because she looked like a smaller, balder version of me — and took my cupped hands into her silken palm, then drew it away quickly, as if burned. And indeed, she had been hurt. A pearl of blood pooled upon her fingertip. Mother’s face twisted in confusion as she sucked at the wound. ‘Where did you get that?’ she asked.

‘In the closet,’ I replied.

I shook my head, bewildered.

‘My closet? You found that in my closet?’ she repeated, her voice rising like a thunderhead.

‘Behind Father’s file cabinet,’ I whispered.

‘But, wh-what is it?’ I stammered as she took me by the collar, steering me toward the stairwell. ‘What is it, Mother?’

I spent the rest of the afternoon sequestered in my bedroom, studying the whorls in the wood grain of my headboard in an attempt to decipher a friendly shape, but seeing only the distorted faces of shrieking ghosts. The thunderstorm outside had abated but a new one, fiercer and more destructive than the first, arose when Father came home. As soon as he set foot upon the threshold, I heard Mother’s wailing, her shrill voice whipping like wind, her words pelting down like driving rain.

She’d shown him the secret.

Boldly, I raced to the kitchen and there she stood, her arm outstretched, holding it by its bristled tail, dodging its swiping claws and gnashing teeth. How terrifying it had become in her presence, how vicious in her grip. And yet, amid this raging squall, Father said nothing. His eyes remained level, and flat. Despite the lashing, the railing, the violence, he said nothing. Nothing at all.

Mother threw the secret in the trash, and we were sent away, The Doppelganger and I, to stay with Grandmother. Usually a pleasant adventure filled with sweet meats and storybooks, I was too distraught to enjoy either, spending the better part of two days pushing my food around my plate and sulking in her backyard, throwing rocks and kicking up clouds of dirt. Even the sound of her wind chimes seemed to sing a mournful funeral dirge. Finally, on the third day, we were allowed back home. I felt much like Jonah from one of Grandma’s stories — vomited from the fish’s belly, weak, hungry, and eager to make things right.

Mother greeted us at the door with bare lips and uncombed hair. I pushed her outstretched arms aside and ran through the house, out the back door to the alley. I wanted to find the secret, to put it back where I’d found it, to undo the destruction I’d caused. But as I kicked over the trashcan and began a desperate search through tin cans and coffee grounds, I knew that Father’s side of the closet was already empty. His suits, his winter coat, his letter jacket, the file cabinet — all of it, no longer there. Nothing left but a heap of wire hangers abandoned on the floor, like a pile of bones picked clean.