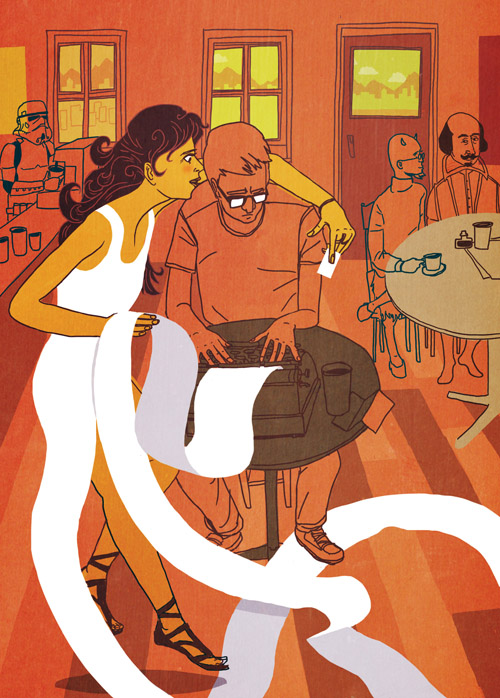 Ridden with writer’s block, a novelist is shown a vast world of inspiration in Kirstie Smith’s magical short story. Illustration by Michael Hirshon.

For the four thousandth, seven hundred and fifty-ninth time, the writer sighs, and puts his head in his hands. Nobody in the café seems to care; the air is filled with chatter, like a stream against the rocks, bubbling over with trivial things. The writer comes here to watch, to wait for something to happen that will bring the spark back, but it remains dormant. He feels the block in his mind like a lead brick in his stomach. It is choking him.

‘May I interest you in something?’

The writer looks up, surprised. Someone has sat down across the table from him, so quietly he didn’t notice them arrive. A woman, smiling, dressed in a white cocktail dress with a satin sheen. She has wavy dark hair, slightly tanned skin, and the kind of wrinkles around the eyes that older women pass off as laugh-lines. Her voice has a slight musical edge to it, an accent that is not quite English.

The writer knows all this, instantly, as if he had long ago read a paragraph describing the woman in a book and has just been asked to recall it from memory. He blinks. ‘Do I know you?’

‘No, but I think you’ll listen to what I have to say.’ The woman quickly reaches out and grabs a leaf of paper from amongst the doodles and scribblings that litter the table – while the writer makes a quiet cry of protest – and starts reading. ‘Dear sir, unless you can provide me with proof that you have progressed on your manuscript by the end of July, I will be forced to withdraw your advance and cancel your…’

‘Give me that!’ the writer yelps angrily, snatching the letter. It was meant to motivate him, to get the creative juices flowing again, but listening to it just makes the block in his stomach feel heavier. ‘My financial status is of no business of yours!’ Suddenly he is outraged at this intrusion. Who does this woman think she is?

‘Oh but it is. Everything you do is my business, because you are my business. Your kind always are.’ The woman’s smile is now uncomfortably reminiscent of a satisfied cat.

‘Whatever it is that you’re selling, I don’t want it,’ the writer replies shortly.

The woman looks offended. ‘I’m not selling anything. The idea! No, I am what you might call a third party, a go-between. A psychopomp.’ With a dramatic flourish, and seemingly from nowhere, she brings forth a gold-edged business card. ‘I help struggling wordsmiths come into contact with…the right people. No fee, not from your end – my clients will take care of that for me. All you have to do is take my card, say my name, and go to sleep. I’ll do the rest.’ The writer feels his eyes drawn to the card, hypnotically. ‘What do you say?’

The writer hesitates for a second, before his desire to get rid of her overcomes his irritation. He snatches the card out of her hands. ‘Fine. What is your name?’ By this point, he is genuinely curious.

She tilts her head to one side. ‘It’s on the card.’

He looks down. For a moment, the weird gold filigree in the centre looks like a random pattern, twisting vines – but then it seems to subtly shift, until he can make out letters, and then a word. ‘Calliope. Isn’t that…’

He looks up. She’s gone.

That night, as he is getting undressed, the writer finds the card in his jacket pocket. He stares at it for a while, then puts it on his bedside table. There’s no harm, he thinks, as sleep begins to envelop him. As his eyes fall, he murmurs ‘Calliope.’

He is on a path, but nothing else is clear, as even the landscape around him has a hazy and indistinct quality. Everything has the look of an impressionist painter who can’t quite decide what he wants his canvas to look like. One minute there are green fields, then the next a mountain valley, and then a bustling city where blurred people rush past and fuzzy buildings tower over him. Before he can focus on any faces, a desert appears, covered in mist. There is no sound.

The writer turns at the voice, and sees Calliope standing on the path behind him, the only thing in focus.

‘I wasn’t sure if your mind was nimble enough to escape the walls of time. Now, if you will follow me?’ She turns abruptly and starts walking away, her high heels clicking against what has become a paved street.

‘Wait, what?’ Flustered, the writer steps forward, narrowly avoiding a penny-farthing bicycle that glides past silently. He stares, briefly, and then they are in a forest and the bicycle has morphed into a tree. The woman keeps walking, her dress untouched by the branches and foliage all around her. He runs to catch up, and walks beside her, panting. ‘What do you mean? And where are we going?’ he breathes.

‘My dear, we are going to market.’ Calliope smiles, and then waves her hand in front of her face as if brushing aside a curtain. Amazingly, the changing haze does part, space itself suddenly rippling and moving. In the gap she has created, there is light, sound and colour — slightly dizzying after the misty quiet. The writer does not have time to process this before he is pushed through into chaos.

‘Dramatic turnarounds! Get your hero out of that plot hole!’

People. People, everywhere, of all types and shapes and sizes, wearing the most random assortment of clothes the writer has ever seen. Everything from jeans to three-piece suits to ball gowns. Hawaiian shirts and shorts to clockwork waistcoats, and top hats to togas to dresses made out of silver foil. And other things, things that are not people, or at least not human. A tiny golem made out of rugged stone skittering under his feet. A sleek mechanical tripod striding above the crowds. Golden dust floating past in the shape of a man. A woman with three yellow eyes and skin as red as blood. He is being pushed and shoved from every direction, and almost nothing that flashes before his eyes is familiar.

It takes more than a minute of this assault on the senses before he is able to perceive that there is some order and structure to this place. He is in a market, surrounded on all sides by stalls in lines that seem to stretch away forever. Some of the people — or ‘beings’, he supposes would be a better word for some of them – are behind the stalls, under the rag-tag assortment of awnings, and it is they that are the source of the sales cries he can hear, piercing above the hubbub. He feels dizzy, and more than a little sick.

Thankfully, there is a cool hand on his shoulder, and Calliope is suddenly there by his side, a white beacon in this surging mass. The crowd automatically parts around her, and there is breathing space. ‘What…where are we?’ the writer manages to gasp. By now he is sure that this is not a dream.

‘This is the Market of Revelation, also known as the Ingenium. It is outside time, space, all universes; everything but the mind. Here you can find fear, glory, comedy and tragedy in equal measure. And anything in it can be bought…for a price.’ Her smile is unreadable.

The writer still feels dizzy, and stares about him in awe. To his left, a man in a red robe and a floppy velvet hat is arguing in Italian with what are unmistakably an angel and a demon behind a counter made out of marble. From his limited knowledge of the language, the writer can just make out ‘No, you can’t have everything…’ in exasperated tones from the demon, who looks rather put-upon. To his left, a woman with fifties-style hair is perusing a price list labelled ‘Political Philosophy’. A little further away, there is congestion in the crowd as it tries to move around a large congregation of people. In the middle of the blockage, a large, scaly dragon is gingerly and delicately handing out swords, which look like silver toothpicks in its claws. By a stall with a sign saying ‘Metafiction’, the writer can hear more haggling. ‘Can I put my book, inside a book, in another book?’ one man says. ‘Recursion? Well that’ll cost you, Mr Fforde…’

It is only when a very familiar figure walks past – thin moustache and goatee, balding, with an Elizabethan ruff around his neck and ink stains on his hands – that the writer’s brain finally kicks into gear, and he realises where he is.

‘They sell ideas?’ His voice catches, not daring to believe it.

He looks at her shrewdly. ‘And when you say there’s a price, what exactly do you mean?’

Calliope raises her eyebrows, looking pleased, and they start to walk along an aisle of stalls, the crowd again parting like the sea around a rock. ‘The price depends on the quality of the idea. Little things, like an inconvenient blind alley, or common things, like an Evil Empire-’ she gestures to a stall as they pass it, where a bearded and bespectacled man is piling a trolley high with Stormtrooper helmets, ‘-are cheaper. The rarer, the more valuable the concept, the more you will be expected to part with. A truly original idea?’ She laughs like a bell, piercing. ‘That would be worth more than anything.’

The writer’s eye lingers on a pile of reddish rocks with a very depressed goblin sitting next to them, holding a sign reading ‘Philosopher’s Stones, buy one get one two three free!’ He isn’t finished just yet. ‘You still haven’t told me what I’m paying with’ he points out, sharply.

‘That’s because I don’t know.’

‘What?’ he says, once again confused.

She sighs. ‘What are you willing to pay? It can be anything – your time, your self-respect, your memory. Or more tangible things,’ she continues over his sharp intake of breath, ‘like your eyesight, your health, your relationships with your family, or your ability to make friends. As I said, it all depends on what you’re willing to give up for glory. For immortality. For the written word.’ She looks him in the eye, and the world seems to stop. ‘The greatest of all have offered me much. Their safety. Their blood. Their lives, and those of their family.’ The writer’s mind is suddenly suffused with images of jackboots, of fatwas and screaming faces calling for his death. In the middle of it all, he hears Calliope, as if from a distance: ‘What will you give for the sake of inspiration?’

There is a moment where not even the surrounding chaos can be heard. Then the writer takes a deep breath, and the world restarts; chattering customers, caterwauling sales pitches and all. A small smile creeps across his face. ‘How much would it be for all of this?’ He gestures around him, at every stall, all the way to infinity.

Calliope’s eyes widen briefly, before she, too, smiles. ‘I’ll find a way to make that happen.’ She takes him by the arm and leads him away, slowly shaking her head.

In the morning, the writer wakes up, his soul burning with fire, energy, raw and hot, and he knows that he needs to get it down on paper before it either consumes him or is lost. Scattering sheets everywhere, he dives for his desk, grabbing a pile of paper and a pen. Then, he begins to write.

‘For the four thousandth, seven hundred and fifty-ninth time, the writer sighs…’