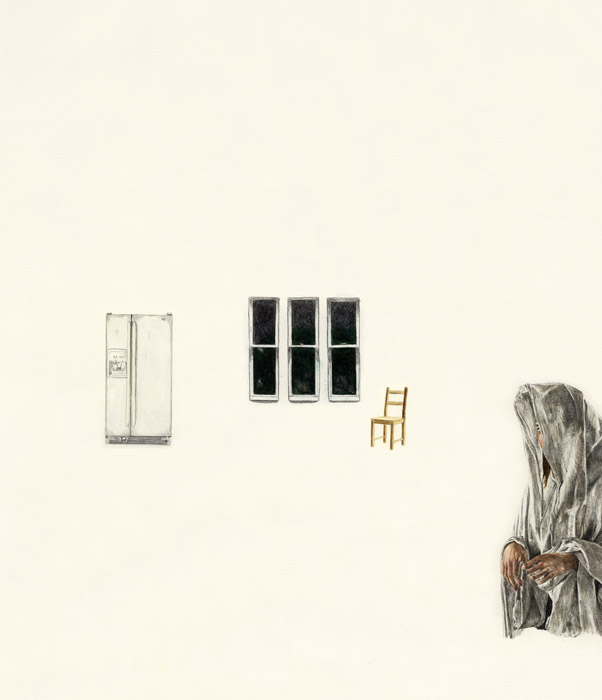 A work colleague who withdraws into his imagination causes a destructive effect in Michael Hitchins’ short story. Illustration by Adam Batchelor.

Gregory wasn’t there. He was supposed to be on the corner of the street at 5am but I had to park and knock on his front door. I sat in his living room while he dressed, staring at a baby gym with dangling tigers and parrots. A black and white scan image fell off the wall and flapped onto my shoe. I picked it up and traced the outline of the embryo with my finger and then fixed it back amongst a mass of happy photographs of the new arrival. I heard the baby starting to cry as we left the house and I paused, but Gregory pushed me out into the chill morning air, pulling on his jacket.

As we rolled through the village and banked up onto the motorway, Gregory shaved and tapped the flecks of stubble into the foot well, which, though it wasn’t my car, disturbed me. I was shocked by his state of dishevelment. His hair had thinned alarmingly, his skin grey and dry. He pulled at his cracked lips continuously and scratched his leg. It wasn’t just because he’d woken up recently – he was now careworn and haggard, and had lost the air of calm confidence that he possessed before. The effects of the baby, I presumed.

Our boss had lent us his majestic, emerald-green Saab to drive down for a trade show. I’d looked forward to travelling in style but now my companion was casting a shadow over proceedings. I felt relieved when he rested his head on the window and fell asleep, but a rasping snore soon erupted and Gregory’s spectacles, reflecting the strobing white lines and cats-eyes at the edge of the carriageway, lent him a fearful, manic appearance.

Almost a year before, Gregory and I were in a pub in Wetherby, and I found myself uncontrollably pouring out my troubles to him. My poor brother was dying of cancer. Sciatica was causing me daily agony. I had been moved to a new team at work and despised my new manager. I was miserable, suffering from headaches and insomnia, unable to accomplish ordinary tasks without supreme effort.

Gregory listened patiently, took a mouthful of Black Sheep and then smiled. ‘I have a room I go to,’ he said. ‘When I’m down. Or when I’m stressed or need some peace and quiet. It’s a beautiful room. Beautiful because it’s so simple.’

‘That’s nice,’ I said, wondering what this had to do with my woes.

‘I suppose it’s really a flat,’ he continued, ‘because there’s a small kitchen down one end with a few cupboards and a fridge. But mainly it’s a room with no furniture. Just bare floorboards and white walls. “The White Room”, I call it. On one side there are three large windows overlooking the Stray. You know the Stray in Harrogate?’

He was talking about the large grassy area that surrounds the town. Not exactly a park because it’s too wide and un-primped, but at the same time not wild enough to be a common.

‘I go there to calm down,’ he went on. ‘I love the floorboards. There’s something so perfect and straight about them. Simple, with no adornment, no clutter; like a ploughed field stretching into the distance. And in the room no one can touch me. There’s no expectation of me doing anything I don’t want to do. I just sit there. And breathe.’

‘A little old wooden one. I sit there and look at the trees outside or people walking past. And there’s a bed to one side of the room. It’s just a roll-out mattress on the floor. I can lie in it when I want. And I can stay there – it’s nice and warm – and stay calm and be on my own and not really think about anything.’

We smiled at each other. Gregory had tears in his eyes and I was on the verge of welling up too. He had opened the curtain onto an exquisite, private world and for a few seconds, in front of the fire in The Green Dragon in Wetherby, this attainment of calmness felt deeply profound. Just then, some of our colleagues burst in and the moment was gone. The next day I plunged back into work and the entire evening was a dim memory, but gradually Gregory’s white room started coming back to me. I remembered that when he began to describe it I instinctively assumed he was talking about an imaginary room but, as he continued, I dismissed the notion and, because he said nothing to the contrary, I assumed it was real. But now I wasn’t sure.

Unfortunately, over the course of that whole year, I never had the opportunity to discuss it with Gregory. He was frequently out seeing clients and when he was back at the office there was never a chance to broach something so personal. I certainly didn’t want to question him about it in front of our colleagues. In any case, I suspected Gregory had regretted telling me once he’d sobered up so I thought it best not to mention it.

It was raining heavily when we arrived at Leicester Forest East and, after I had roused Gregory, we dashed inside. He attempted to get his hair in some sort of order by sticking his head under a tap and then stooping under a dryer. It looked no better. After a silent breakfast of coffee and croissants we returned to the car and Gregory took over the driving. As we pulled onto the motorway, he muttered, ‘Right, let’s see what this baby can do.’ I thought he was joking but he immediately started bombing down the fast lane at 90 miles per hour.

‘Sorry, Lawrence. Force of habit. We’re all right though, I’m an advanced driver.’

A few minutes passed uneventfully until Gregory said, quietly, ‘I’ve been having trouble. With the white room.’

I was struck by the assumption that I knew what he was talking about or even remembered that beery conversation from the previous year.

‘What kind of trouble?’

‘Of course it’s fucking imaginary,’ he snapped, ‘but it’s taking me over.’

He was now in the middle lane, flashing anyone who was too slow to move out of the way.

‘I started going there more and more. Lucia went mental after Alfie was born and when her mother died it was a nightmare. I’m inept at the best of times, you know, with emotions. You try and say the right thing but ultimately what can you do about it? And work, I detest it.’

‘You don’t give that impression.’

‘It’s not PLD as such, it’s just any job. I can’t stand working. So I kept going there, to the room – retreating. But what happened was I’d be there relaxing and the fridge would start up this annoying hum and I had to struggle really hard to make it stop. Can you believe it? The fridge in my own brain was driving me round the bend. But I could cope with that – it was just irritating. Then I saw this girl outside an auction house – in real life. She slipped and I grabbed her before she fell to the ground. And she winked at me. She had such sweet smile, and dimples. After that, whenever I went to the white room, Natalie would show up. That’s her name.’

We were back in the fast lane touching a hundred.

‘What about Lucia?’ I asked. ‘Does she ever come to the white room?’

‘No, never, thank God. But, Lawrence, this Natalie, she fucks like a train, I’m telling you. The most amazing, wild sex…’

‘Yeah, imaginary, imaginary. But, like, up against the windows and doing it on the ceiling, up the walls. It was all purple carpets and zigzags and crazy movement, you know, like a camera zooming in and out.’

Gregory grinned, and then swore as the car swerved.

‘That’s the trouble. I was supposed to go there to calm things down but now I was going there all the time and it was pulling me apart. It wasn’t restful anymore, it was mayhem. But, man, she did everything.’

‘Everything, except nothing,’ I replied. ‘Have you been to a doctor?’

‘I don’t believe in pills. Those medics dope you up and turn you into a different person. They take control of you and I wanted to be in control of myself.’

‘But you were out of control.’

‘I know. And now there’s a problem with the floorboards. Little bits of torn-up paper, tiny triangles twisting out of the crevices and swarming up onto me. I try to bat them away but I fall and crack my head open. It happens over and over again. These weird, mottled patterns appear on the window panes and the light shade – all sharp and conical – becomes more and more prominent and I’m always looking up at it or it’s swooping down on me. And Natalie’s there lying on the bed with a sheet draped over her and I pull back the sheet and her eyes are missing. There’s just these bloody holes in her head where her eyes should be and she’s screaming, screaming, screaming. Oh man, it’s crazy, isn’t it? Am I crazy?’

I awoke in a hospital bed with those last few words repeating in my mind. I had no recollection of the crash but the Saab was a write off and Gregory had vanished off the face of the earth. After six months’ rehabilitation I decided I no longer had the stomach for PLD and spent three years in South America. I had an extraordinary, wonderfully exciting time but I could never quite put out of my mind the shock of that day with Gregory.

When I returned a month ago to visit my father in Harrogate, we strode out along the Stray one afternoon and I looked up at the distinctive, Georgian terrace across the road, and remembered Gregory. The building seemed to comprise several apartments – each with three large windows overlooking the Stray and I wondered whether Gregory had based his imaginary room on one of these. As we drew nearer, a figure appeared at one of the windows and I could make out that it was sitting down. Could it be him? I was struck by the idea that Gregory had made his fantasy a reality and was now ensconced in his eyrie overlooking the Stray. But I walked on. Did I really want to meet this person again after what had happened on that January morning three and a half years before?

After dinner that evening, I left Dad at home and walked across town. When I arrived at the building I found a communal entrance and half a dozen doorbells with nameplates. Each nameplate was blank so I pressed one at random. A buzz and a click and I was inside. I made my way up the dark staircase and, on the second floor, found a door ajar. I pushed it open and walked into an empty room. The walls were white and bare. Three windows looked over the Stray and by the middle one was an old, wooden chair. I turned slowly to the right. A rolled out mattress lay on the floor and a sheet was drawn up over what I took to be a body. It moved.